The sequential model describes how the system parts interact to execute a use case and get a function done. In this section, we will be discussing, the sequence model in brief with the help of examples. So, let’s start.

What is Sequence Model?

Sequence model is a behavioural model which shows a sequence of behaviour shown by the system to the user to execute a particular use case. This behavioural sequence is shown by the exchange of messages between the set of objects.

The messages that are shared by the objects can be procedural calls or asynchronous signals which are useful for the execution of the particular function in the system. Sequence model can be modelled in two ways the one form is the scenario and the other and more structured form is the sequence diagram.

Scenario the word itself defines that it includes the written description of the details of an individual function. In term of sequence model, a scenario is the series of events that occurs in order over a period of time to execute a particular functionality of the system.

Well, it depends whether a scenario includes all events of the system or only those which are invoked by the object for the execution of a particular use case.

To understand the concept of scenario lets take an example where the scenario is the session with an online stock broker. The sequence of events that occur during this session is enclosed in the scenario. 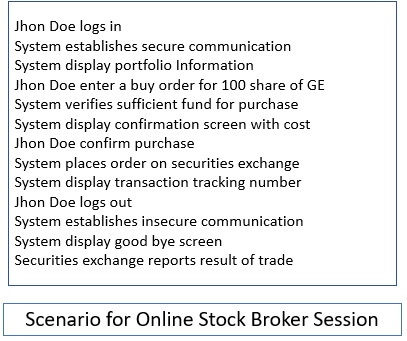 Now, you can discover that the scenario displayed in the figure above is a high-level interaction. As the first event of the scenario which is John Doe logs in, itself has several messages to be exchanged between the Jhon and system. Like, the system asks for user name and password, Jhon then puts the user name and password, the system verifies the identification and then allow John to log in.

But, in the early stages, developers frame the scenario at a high level and then in later stages of development they concentrate on detailing of the events. The scenario includes exchanged messages and also the operations performed by the objects

So, first, the developers discover the objects that need to interact to execute an event. Between the interacting objects, the developers have to decide who will be the sender and the receiver of the message along with the sequence in which messages will be exchanged. After all this, operations are added for the internal computation and then the scenario is turned down to the code.

The next sequence model is a sequence diagram that is far more explanatory and well-structured which we are discussing in the section below.

The figure below shows the sequence diagram for the scenario that we have discussed above of a stock broker. 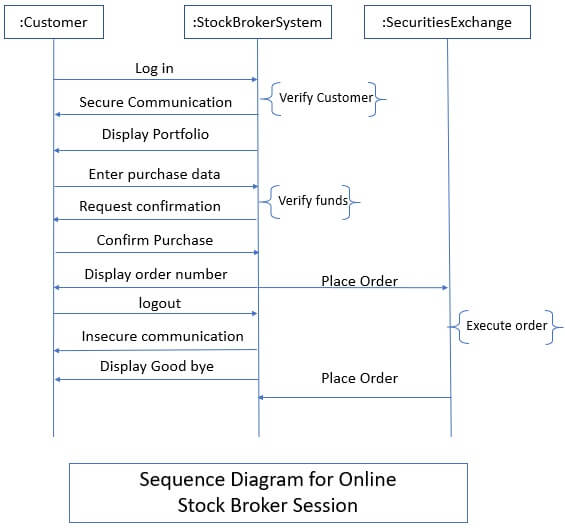 It is not compulsory that you should describe a use case in a single sequence diagram. It’s always better to show a portion of the use case, in a sequence diagram as large-scale interactions may have several independent tasks that could be combined in many ways. 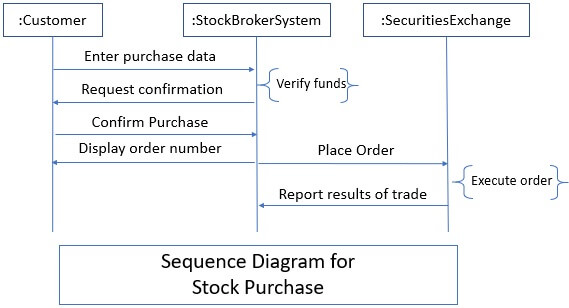 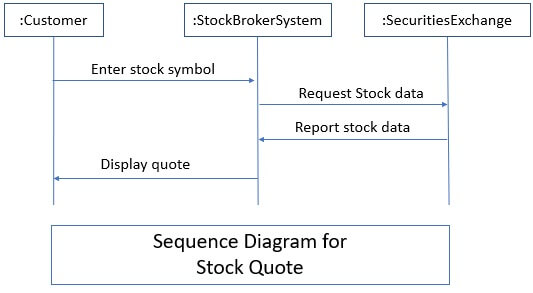