In this section, we will discuss contiguous memory allocation in detail along with its advantages and disadvantages. So let us start

Now, the question arises how to allocate the available memory space to the user processes that are waiting in a ready queue? 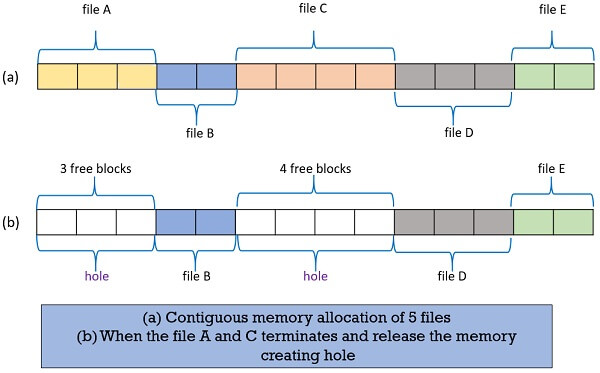 How holes are created in the memory?

Initially, the whole memory space is available for the user processes as a large block, a hole. Eventually, when the processes arrive in the memory, executes, terminates and leaves the memory you will see the set of holes of variable sizes.

In the figure above, you can see that when file A and file C release the memory allocated to them, creates the holes in the memory of variable size.

Now, at this point, the operating system checks whether this newly formed free large hole is able to satisfy the memory requirement of any process waiting in the ready queue. And the process goes on.

The operating system uses either the block allocation list or the bit map to select the hole from the set of holes.

Now, as we have entries of free blocks which one must be chosen can be decided using either of these strategies: first-fit, best-fit, worst-fit strategies.

Here, the searching starts either at the beginning of the table or from where the previous first-fit search has ended. While searching, the first hole that is found to be large enough for a process to accommodate is selected.

This method requires the entire list of free holes to be sorted. Here, again the largest hole among the free holes is selected. This strategy leaves the largest leftover hole which may be useful for the other process.

The bit map method only keeps track of the free or allocated block. One block is represented by one bit, bit 0 resembles the free block and bit 1 resembles that the block is allocated to a file or a process.

It does not have entries of the files or processes to which the specific blocks are allocated. Normally, implementing the first fit will search the number of consecutive zeros/free blocks required by a file of process. Having found that much of consecutive zeros it allocates a file or process to those blocks.

But implementing best-fit or worse-fit will be expensive, as the table of free blocks sorted according to the hole size has to be maintained. But the bit map method is easy to implement.

The solution to the problem of external fragmentation is memory compaction. Here, all the memory contents are shuffled to the one area of memory thereby creating a large block of memory which can be allocated to one or more new processes.

As in the figure below, you can see at the last process C, B, D are moved downwards to make a large hole. 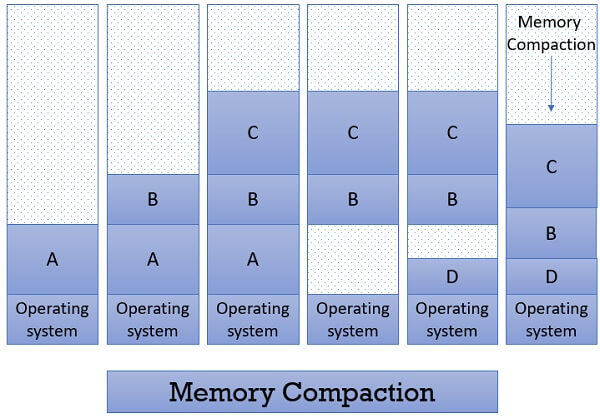 The main disadvantage of contiguous memory allocation is memory wastage and inflexibility. As the memory is allocated to a file or a process keeping in mind that it will grow during the run. But until a process or a file grows many blocks allocated to it remains unutilized. And they even they cannot be allocated to the other process leading to wastage of memory.

In case, the process or the file grows beyond the expectation i.e. beyond the allocated memory block, then it will abort with the message “No disk space” leading to inflexibility.

The advantage of contiguous memory allocation is it increases the processing speed. As the operating system uses the buffered I/O and reads the process memory blocks consecutively it reduces the head movements. This speed ups the processing.