A Network Security Model exhibits how the security service has been designed over the network to prevent the opponent from causing a threat to the confidentiality or authenticity of the information that is being transmitted through the network.

In this section, we will be discussing the general ‘network security model’ where we will study how messages are shared between the sender and receiver securely over the network. And we will also discuss the ‘network access security model’ which is designed to secure your system from unwanted access through the network

For a message to be sent or receive there must be a sender and a receiver. Both the sender and receiver must also be mutually agreeing to the sharing of the message. Now, the transmission of a message from sender to receiver needs a medium i.e. Information channel which is an Internet service.

Well, we are concerned about the security of the message over the network when the message has some confidential or authentic information which has a threat from an opponent present at the information channel. Any security service would have the three components discussed below:

It also includes the addition of code during the transformation of the information which will be used in verifying the identity of the authentic receiver.

3. There must be a trusted third party which should take the responsibility of distributing the secret information (key) to both the communicating parties and also prevent it from any opponent.

Now we will study a general network security model with the help of the figure given below: 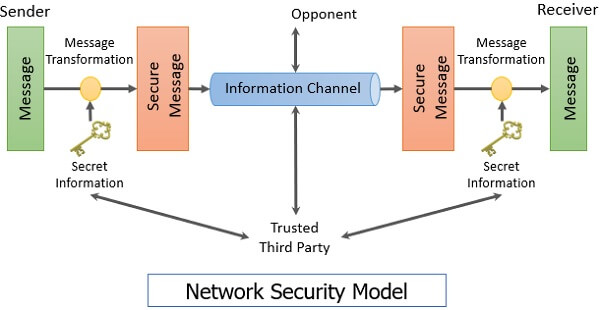 The network security model presents the two communicating parties sender and receiver who mutually agrees to exchange the information. The sender has information to share with the receiver.

So, considering this general model of network security, one must consider the following four tasks while designing the security model.

1. To transform a readable message at the sender side into an unreadable format, an appropriate algorithm should be designed such that it should be difficult for an opponent to crack that security algorithm.

3. Now, the secret information is required at both the ends, sender’s end and receiver’s end. At sender’s end, it is used to encrypt or transform the message into unreadable form and at the receiver’s end, it is used to decrypt or retransform the message into readable form.
So, there must be a trusted third party which will distribute the secret information to both sender and receiver. While designing the network security model designer must also concentrate on developing the methods to distribute the key to the sender and receiver.
An appropriate methodology must be used to deliver the secret information to the communicating parties without the interference of the opponent.

You are well aware of the attackers who attack your system that is accessible through the internet. These attackers fall into two categories:

2. Intruders: These attackers intend to do damage to your system or try to obtain the information from the system which can be used to attain financial gain.

The attacker can place a logical program on your system through the network which can affect the software on your system. This leads to two kinds of risks:

a. Information threat: This kind of threats modifies data on the user’s behalf to which actually user should not access. Like enabling some crucial permission in the system.

b. Service threat: This kind of threat disables the user from accessing data on the system.

The network security model to secure your system is shown in the figure below: