Vector processing performs the arithmetic operation on the large array of integers or floating-point number. Vector processing operates on all the elements of the array in parallel providing each pass is independent of the other.

Vector processing avoids the overhead of the loop control mechanism that occurs in general-purpose computers.

In this section, we will have a brief introduction on vector processing, its characteristics, about vector instructions and how the performance of the vector processing can be enhanced? So lets us start.

Look at the figure below, and compare the vector processing with the general computer processing, you will notice the difference. Below, instructions in both the blocks are set to add two arrays and store the result in the third array. Vector processing adds both the array in parallel by avoiding the use of the loop. 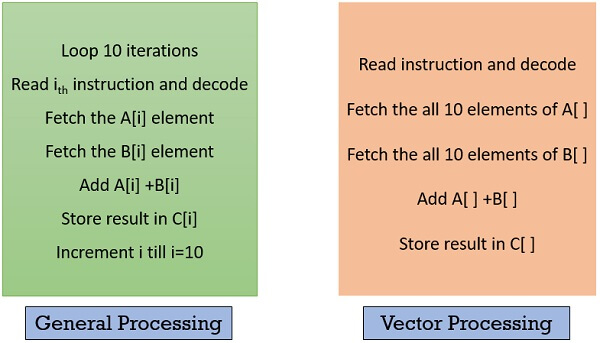 Each element of the vector operand is a scalar quantity which can either be an integer, floating-point number, logical value or a character. Below we have classified the vector instructions in four types.

Here, V is representing the vector operands and S represents the scalar operands. In the figure below, O1 and O2 are the unary operations and O3 and O4 are the binary operations. 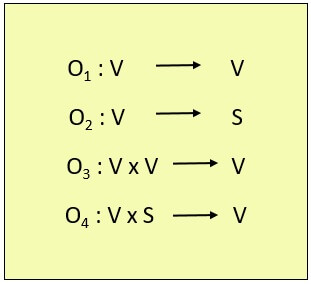 Most of the vector instructions are pipelined as vector instruction performs the same operation on the different data sets repeatedly. Now, the pipelining has start-up delay, so longer vectors would perform better here.

The pipelined vector processors can be classified into two types based on from where the operand is being fetched for vector processing. The two architectural classifications are Memory-to-Memory and Register-to-Register.

In Memory-to-Memory vector processor the operands for instruction, the intermediate result and the final result all these are retrieved from the main memory. TI-ASC, CDC STAR-100, and Cyber-205 use memory-to-memory format for vector instructions.

In Register-to-Register vector processor the source operands for instruction, the intermediate result, and the final result all are retrieved from vector or scalar registers. Cray-1 and Fujitsu VP-200 use register-to-register format for vector instructions.

A vector instruction has the following fields:

Operation code indicates the operation that has to be performed in the given instruction. It decides the functional unit for the specified operation or reconfigures the multifunction unit.

Address Offset is always specified related to the base address. The effective memory address is calculated using the address offset.

Vector length specifies the number of elements in a vector operand. It identifies the termination of a vector instruction.

In vector processing, we come across two overheads setup time and flushing time. When the vector processing is pipelined, the time required to route the vector operands to the functional unit is called Set up time. Flushing time is a time duration that a vector instruction takes right from its decoding until its first result is out from the pipeline.

For obtaining the better performance the optimized object code must be produced in order to utilize pipeline resources to its maximum.

We can improve the vector instruction by reducing the memory access, and maximize resource utilization.

The scalar instruction of the same type must be integrated as a batch. As it will reduce the overhead of reconfiguring the pipeline again and again.

Choose the algorithm that would work faster for vector pipelined processing.

A vectorizing compiler must regenerate the parallelism by using the higher-level programming language. In advance programming, the four-stage are identified in the development of the parallelism. Those are
Parallel Algorithm(A)
High-level Language(L)
Efficient object code(O)
Target machine code (M)
You can see a parameter in the parenthesis at each stage which denotes the degree of parallelism. In the ideal situation, the parameters are expected in the order A≥L≥O≥M.

So, this is how vector processing allows parallel operation on the large arrays and fasten the processing speed.