ICMPv4 Internet Control Message Protocol version 4 is definitely a Network layer protocol. And its job is to report the error to the source if any problem arises while delivering the datagram. The ICMPv4 is a message-oriented protocol. It’s a protocol of version 4 of the TCP/IP protocol suite.

In this section, we will discuss the ICMPv4 message along with its message format. We will also be discussing types of ICMPv4 messages.

As we are aware the IPv4 protocol doesn’t have any mechanism to report errors or correct errors. So, IP functions in assistance with ICMP, report errors. ICMP never gets involved in correcting the errors. Higher-level protocols take care of correcting errors. Every time, ICMPv4 deliver an error report to the original source of the datagram.

There can be several reasons behind reporting the error like:

And there can be several reasons to report the error.

Below we have the message format for the ICMPv4 message. It has an 8-byte header and apart from this, it has a variable size data section. Though the header format gets changed for each type of message. Still, the first 4 bytes of each message remains the same. 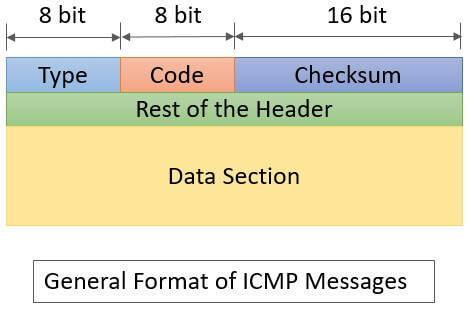 The types of ICMPv4 messages as:

The most important function of ICMPv4 is to report the error. Although it is not responsible to correct the errors. The higher-level protocols take the responsibility of correcting the errors.

ICMPv4 always send the error report to the original source of the datagram. As the datagram has only two addresses in its header:

So, ICMPv4 uses the source address for reporting the error.

There are some important characteristics of the ICMPv4 message:

Consider if a host or a router is unable to deliver or route the datagram. Then they discard the datagram. And send a destination unreachable error message to the original source host.

Refer to the image above, you will observe that the Type section of the destination unreachable error message is ‘3’. The Code section defines the reasons for discarding the message. For destination, unreachable message code ranges from 0-15.

The source quench error message informs the source that the datagram has been discarded. Due to congestion in the router or destination host.

Every datagram has a field ‘time-to-live’, which decrements by 1 every time it visits a router. There can be two reasons to send the time exceeded message to the source host which is defined by code 0 and code 1.

If the destination host or the router find any ambiguity in the header of the IP datagram. Then they discard the datagram. And send a parameter problem error message to the originating source host of the datagram.

A router sends a redirection message to the localhost in the same network to update its routing table. The router here does not discard the received datagram. Instead, it forwards it to the appropriate router.

When echo request and reply messages are exchanged from one host or a router to another host or a router. It confirms that the two hosts or routers can communicate with each other.

Timestamp request and reply messages calculate the round trip time. It is the time required by an IP datagram to travel between two hosts or routers. This pair of messages are also used for synchronizing the clocks of two machines (hosts or routers).

In version 6 of the TCP/IP protocol suite ICMPv4 is also revised with addition to version 6 of ICMPv6. The two internet debugging tools that utilize ICMPv4 are ping and traceroute.