What is State Modelling?

So, on an, all the state model thereby represents behaviour and control aspect of the entire system. The state model is comprised of several state diagrams. Each state diagram represents a class with the aspects important from the application point of view. The figure below will show you the sample state diagram that shows the relation of events to states which we will discuss in the section below.

Events are the incidents that take place at a particular time. For example, a train departs from the station, a person switches off the button and so on. In the problem statement, you can identify events as the verbs in past tense or you can identify them as the beginning of some condition.

The two non-relating events are said to be concurrent if they don’t have an impact on each other. Events can also be the error condition like the transaction aborted, timeout condition. Well we have several types of events but here we will discuss some common type as given below:

The signal event describes, sending and receiving of information from one object to another at a particular time. This event specifies one-way transmission.

In UML the change event is expressed using ‘when’ keyword followed by the boolean expression.

A state can be identified as a verb with the suffix of ‘ing’ for example, eating, waiting, sitting. In UML the state of an object is represented with the round box containing the state name.

When an object changes its current state to another state it is termed as the transition. The source state and the target state of a transition are usually different but, in some cases, both source and target may be the same.

The state diagram in a state model represents the order of the events which causes the change in states sequentially. A state diagram is basically a graph, where every node in a graph denotes the state and every line connecting the nodes are the transitions that respond to an event and cause changes in the state.

There are multiple state diagrams in a state model and each state diagram would represent a class and its timely behaviour, important from the application point of view. The diagram below represents the state diagram for a chess game. 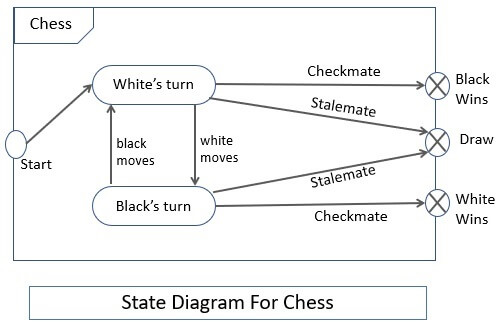