Use case relationship models the dependency between the use cases in the interaction model of a system. Well, the independent uses cases adequately represent the simpler system. But to represent the complex or large system we need to structure the complex use cases.

In this section, we will discuss in brief about modelling the relationship between use cases to represent a large and complex system. We will also discuss the kind of relationship that can be structured between the use cases.

What is Use Case Relationship?

Establishing relationships between the use cases allow reusing those use case which needs to be defined repeatedly and this reduces the efforts of developers.

The kinds of relations that could be modelled between use cases are as follow:

Include relationship is modelled between the use cases when a use case includes the behavior sequence of another use case. The use cases that need to be described repeatedly for a complex or a large system are modelled once and included in the other uses cases when required.

Let’s move on an example which would help us in understanding the include relationship among the use cases more clearly. Now, consider an online stock brokerage system which involves several uses cases among which three would be secure session, make a trade and validate password.

Now, whenever a user establishes a secure session it includes validation of passwords and whenever the user make a stock trade then also the passwords are validated. 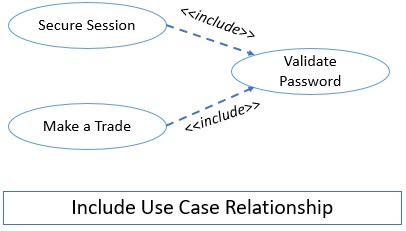 Well, when we observe both ‘include’ and ‘extended’ relationship both add up behavior sequence to the base use case. This is the scenario when initially the basic elements are modelled and then advanced features are added to the base.

Let’s take an example of extend the relationship to understand it properly. A stock brokerage system has a use case trade stock, which allows the customer to buy the stock for the cash in the account. Now, if the customer has insufficient balance in his account but still, he wants to purchase the stock. 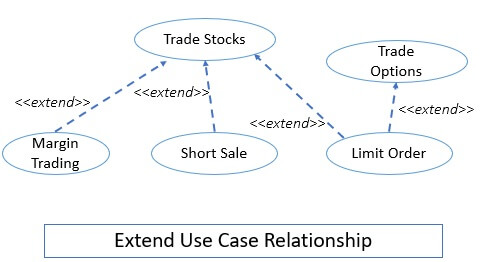 The extend relationship in UML notation is represented with the dashed arrow. The arrow head points to the base use case. This dashed arrow is annotated by the keyword <<extend>>.

Well, the generalization in the use case is little complex when compared with generalization among classes. The child class add up attributes and operation to the parent class but the order of insertion is not so important.

Combination of Use Case Relationship 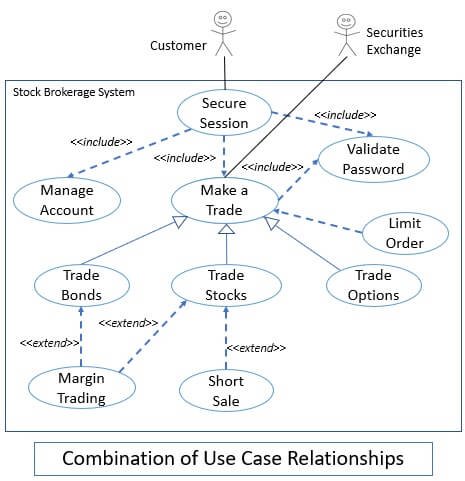