Open shortest path first is a routing protocol that determines the shortest distance between two routers in an autonomous system. The OSPF protocol is developed on the basis of link-state routing that we discussed in our previous content. In this section, we will discuss the working of OSPF. We will also discuss the types of links in OSPF and also the types of OSPF packets.

To make routing more efficient the OSPF divides the autonomous system into multiple areas. The area can be referred to as a group of networks, hosts, and routers. The routers present in the particular area flood routing information to all other routers of that area. Each area has a distinct identification number.

Among these multiple areas, there is a distinct area which is termed as backbone area whose area identification is zero. Each area in the AS must be connected to this backbone area. 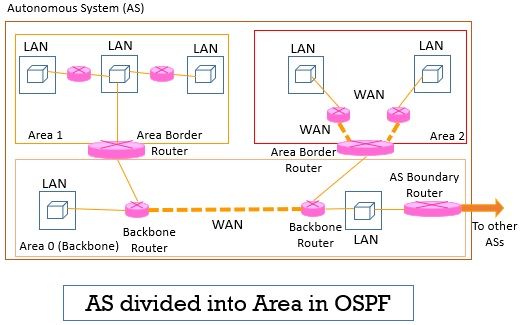 The routers in the backbone area are referred to as backbone routers. There is also an AS boundary router that propagates routing information of an OSPF network with routers in a non-OSPF network. Due to some reason if the link between an area and a backbone area is broken it is the responsibility of the administrator to establish a virtual link between them.

Administrators of an autonomous system assign a cost to each route or link (connection) to which we refer as a metric. This metric depends on the kind of service the link is providing. So, a router can have multiple routing tables each based on a different kind of service.

The transient link connects multiple routers to a particular network. LANs and some kind of WANs that have two or more routers are of this kind. The transient link is neither realistic nor it is efficient. As in the OSPF, each router has to advertise its neighborhood to every other router which increases the traffic in the network making it inefficient.

The figure below shows an AS in Open Shortest Path First. The pair of routers AD and BE are connected through point-to-point links. The network N1 represents a transient network as it has three neighbors C, A, and B. The network N2 is a stub network that has only one neighbor i.e., router C. We have three stub networks N2, N4, and N5. 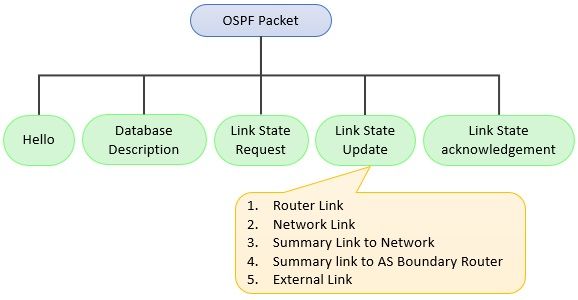 Whenever a router is introduced in the network for the first time or if it resumes after its failure, it has to gain information about all link-state databases. It cannot just wait for all the other routers to send links state update packets.

So, we have seen above that whenever a router is connected to a domain it sends a Hello packet to all the neighbors. In response to the Hello packet, the neighbor sends the database description packet.

The database description packet doe not contain a detailed description of all the links instead it has an outline of all links.

After receiving the database description message the newly connected router sends one or several link-state request messages depending on the number of links about which it has to gain information.

A router uses the router link LSA to advertise the status of all of its links and also about the router’s neighbor connected to the other end of the link.

This packet is used to inform about the routers connected to the network. usually used by the designated router of the transient network.

The area border router also receives all the router link LSAs and network link LSAs so it creates a routing table for each area it is active in. So, it uses the summary link to the network to inform routers of an area about the existence of other networks outside the area.

The link-state acknowledge packet is sent by the router in response to the link-state update packet. This makes the OSPF protocol more reliable.

So this is all about the Open Shortest Path First protocol which is used to determine the shortest path from a router to other routers in an autonomous system.