Routing information protocol (RIP) is a routing protocol that lets routers of an autonomous system inform each other about the changes inside the network. It is an intra-domain routing protocol as it updates the routing tables of routers inside an autonomous system. Routing specifies all those protocols that define the route of packets from source to destination across multiple networks.

The routing protocols upgrade the dynamic routing table whenever there is a change in the Internet. In this section, we will discuss the working of the RIP routing protocol along with its message format. We will also study the RIP timers, advantages, and disadvantages.

As Routing Information Protocol is an intra-domain protocol it updates the routers inside the autonomous system about any change in the network such as a path failure, path validity, path expiry, etc. The RIP protocol implements the features of distance vector routing with some consideration listed below:

The route with the lowest hop count is chosen i.e., route 2 with hop count 2. The RIP also performs load balancing when there are multiple routes with same lowest hop count then the source router sends data from both the route to balance the load on the network.

The RIP message can either be a request message or a response message.

The unsolicited response message is either sent at a regular interval of 30 sec or in case there is some change in the routing table. Let us discuss the format of the RIP message. 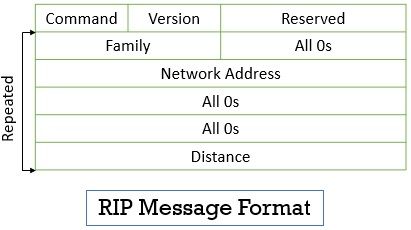 Command: The content of this field indicated whether the RIP message is a request message or a response message. This is an 8-bit field.

Version: This field indicates the version of the RIP protocol used. This is also an 8-bit field.

Family: This is a 16-bit field that defines the family to which the RIP protocol belongs.

Network Address: This is a 32-bit which indicates the address of the destination network.

Distance: This is a 32-bit field that defines the hop count from the router that advertises the RIP message to the destination router.

To regulate the operation of the Routing Information Protocol, it is accompanied by three timers a periodic timer, an expiration timer, and a garbage-collection timer.

Now if the expiration counter reaches 0 and due to some reason, the update message is not received for that particular route, the route gets expired and its metric is set to 16 which means the route is unreachable.

When information regarding a certain route becomes invalid the routing table does not remove that route immediately. Instead, the routing table displays the invalid route with the metric 16 and sets the garbage-collection timer to 120 sec. When the timer count reaches 0 the route is removed from the routing table and this removal is informed to the neighboring routers.

Advantages and Disadvantages of RIP

So, this is all about the Routing Information Protocol that updates the routers in an autonomous system about the changes in the network. The RIP protocol has been advanced to the newer version RIPv2 and RIPng that overcomes the shortcomings of the previous version RIPv1.