What is Distance Vector Routing Protocol?

Each path has some cost or distance associated with it which a datagram has to pay off to travel from one node to another.  The paths with smaller cost are more appealing and are preferred over the path with a larger cost to reach the destination. Each router in the system organizes this information in a distance-vector table or routing table.

The distance vector routing protocol uses the basic principle of the Bellman-Ford Algorithm to identify the shortest path through the network. So, let us take a quick review of Bellman-Ford’s algorithm.

As we have learned above, each path connecting the nodes is associated with the cost. So, to calculate the shortest distance follow the following steps:

This algorithm is repeated until we find the shortest distance vector between two nodes.

Bellman-Ford’s algorithm was designed with the view that we have all the initial information about each node in the graph at the same place. So, the Bellman-Ford algorithm was able to generate a result for each node synchronously.

In such situations, the routing table of every router must be updated asynchronously. Because a router has to update its routing table on the basis of information it receives from its neighbouring routers. So, the Bellman-Ford algorithm needs to be modified to design the distance vector routing algorithm:

Let us understand this algorithm with an example:

Initially, we can see that all the routers have their own routing table. But, these routing tables are not created synchronously. Whenever a router is booted it creates its routing table.

In the diagram below we have discussed the changes in the routing table of router B as it receives records from router A. 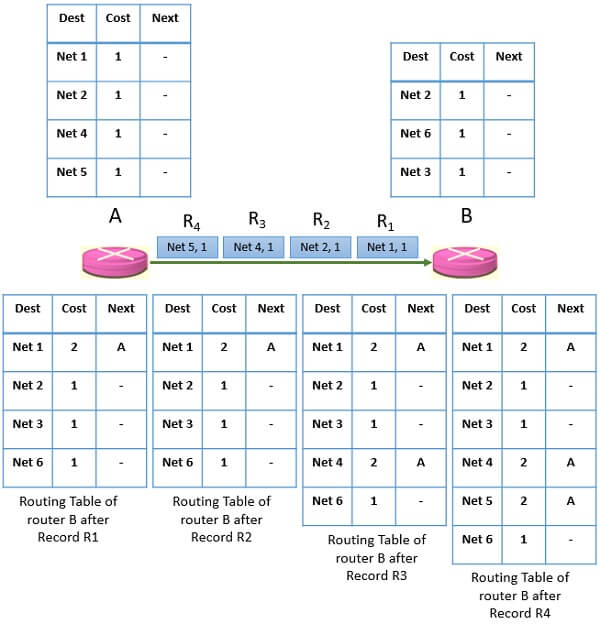 The same thing happens with record R4. Net 5 is not in the routing table of router B. So, it adds the same to its routing table and adds 1 hop to the cost of record along with the next-hop A.

In a similar way, router A, C and D also update their routing table and send the updated information to their neighbouring router. The final routing tables of all the routers for the current scenario would be like: 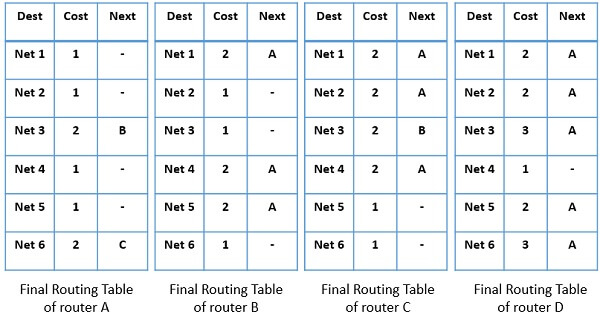