Link state routing is an interior protocol that updates the routers inside the autonomous system i.e it is an intradomain protocol. The link-state routing was introduced to overcome the shortcomings of the distance vector routing protocol.

The reason behind the replacement of distance vector routing protocol was it would take too long to propagate the information about the change in the cost of the link, or if the link becomes unavailable.

Whenever a new router is initialized inside the domain of an autonomous system the first thing it determines is the cost of the links on each of its interfaces. Once it determines the cost for the link at each of its interfaces the router advertises this information to all the routers present in the domain and it keeps monitoring the cost of the links onwards.

The working of link-state routing can be stated in four simple steps.

Discussing the working of link-state routing in brief let’s discuss the building of routing table at each router in the domain in brief.

While building of routing table the routers have to ensure that they are showing the shortest path to every other router in the domain.  Building a routing table involves the following steps.

Let us discuss each step in more detail.

The sequence number of the LSP helps the receiving routers to compare between the old LSP and new LSP and it also facilitates the flooding feature of link-state routing. The age of LSP helps routers in the domain to decide the time at which the LSP must be discarded.

The LSP is created by routers in the domain at two events first when the topology of the domain gets changed and second at a regular interval.

The created LSPs are disseminated to all other routers present in the domain, not just the neighboring routers. This transmission of LSPs to all the routers in the domain is referred to as flooding.

In the first step, the created LSP is sent on the link at each interface of the router.

The routers receiving the LSPs first compare it with the LSP it has received earlier. If the new LSP is older than the previous LSP the newly received LSP is discarded else the router performs the following steps to ensure flooding.

Iteration: This step is repeated until all the routers are added to the root node. This step has two sub-steps

Let us take an example, in the figure below, there is a topology of an AS.

We will discuss how the shortest path tree for node A. First, we will initialize node A and set the shortest distance to its immediate neighbors. 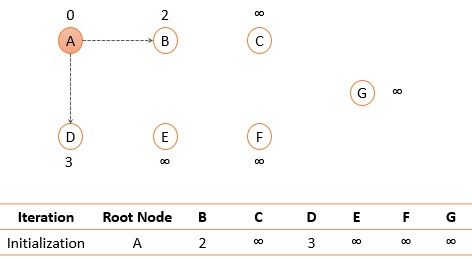 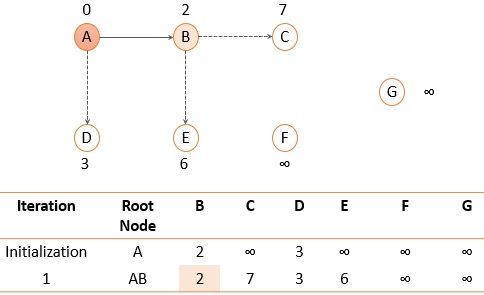 Now search for the nodes that are not added to the path yet (C, D, E) and select the one with the shortest distance i.e. node D. 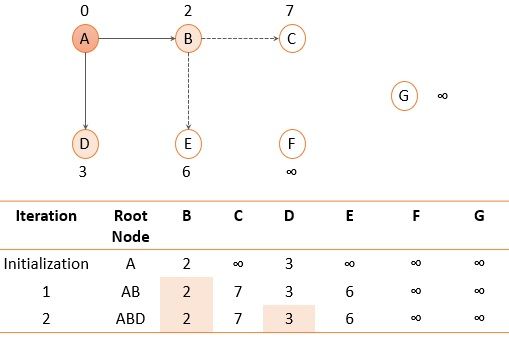 Now, nodes B and D that we added to the path were directly connected to root node A and were at the shortest distance as compared to any other path. Further, we have node E and node C which can be reached by node A through node B or through node D. Let us check out which path is shortest.

Here we will choose the path for node E through node B. Similarly, we will calculate the shortest distance for node C.

Now, node E has the shortest distance so we will add node E to the path. 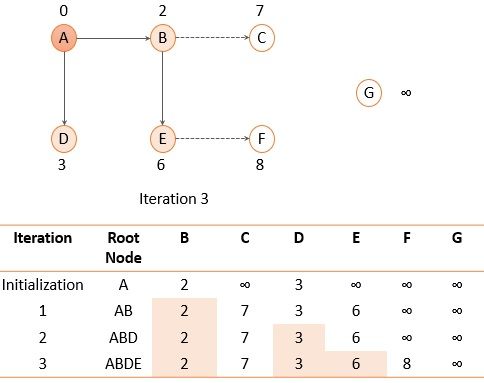 After adding node E to the path again explore the nodes that are not added to the path and there enlist their cost as the distance. Again select the node with the shortest distance so we will add node C to the path. 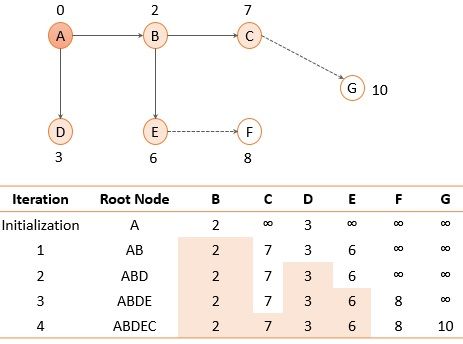 Also, the root node A can reach node G through node F with the shortest distance i.e.9. So finally we add node G.

Using the shortest path tree each router creates a routing table which has three column destination, cost, and next router. In the figure below, I have given a routing table for router A. Similarly the routing table is created for all the routers in the domain. 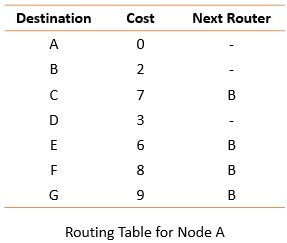