The complex system can be restructured by implementing sub diagrams to a high-level diagram and this can be done by expanding the states that have multiple sub states. This is just like we use macros in the programming language.

To get a better understanding of this let us consider an example of a vending machine. B At the beginning the machine is idle, now, a person comes and insert some coins into the vending machine and select an item. If the selected item is not available or the amount inserted is insufficient then the machine would wait for the person to take another action.

If the amount is sufficient and the item is available then the machine would dispense the selected item and deduct the required amount from the inserted amount and would return the remaining change. The diagram below shows you the state diagram of the vending machine. 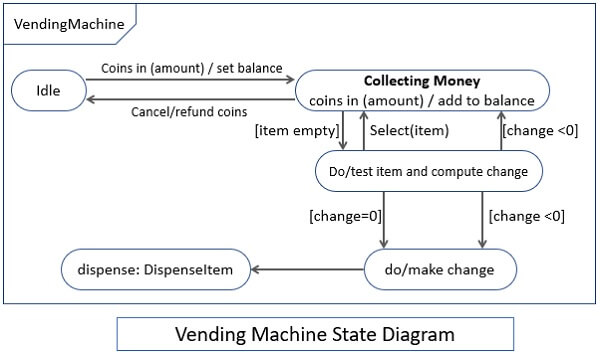 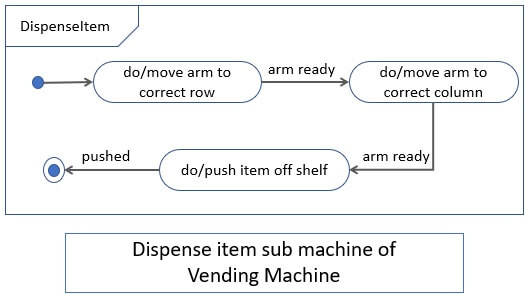 In the UML notation, the sub machine is denoted by the state name followed by a colon and the corresponding submachine name. Conceptually a submachine is just like the subroutines in the programming language.

The other method to model the complex system is using nested states.

Nested states, is a deeper alternative to expanding states. When a state has multiple sub states then they could be nested and enclosed in a contour and could be labelled as the composite state name. Consider an example of a nested state for a phone line. 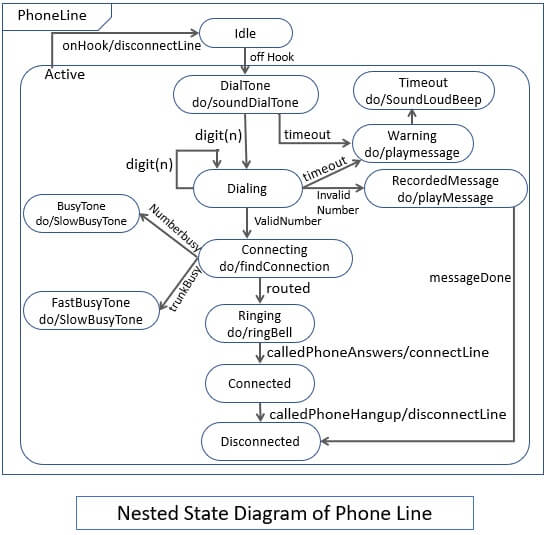 Let us understand nested states with one more example of ‘car transmission. Observe that there are three states inside CarTransmission state diagram i.e. reverse, neutral and forward. Among these three states, the forward state has three nested states i.e. First, Second and Third. 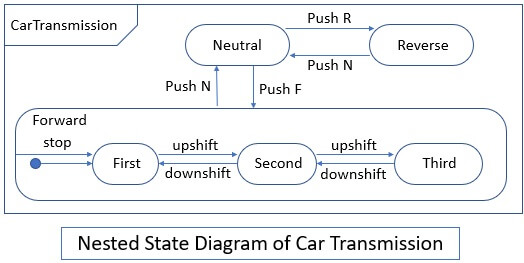 But here by default, the First nested state in the Forward contour is the initial state and the control is in the First state. Here the Forward is just an abstract state. You can notice that the event Stop is shared by all the three nested state. That means if the car is in any Forward gear the stopping event would transit the car to the First state.

So, this is all about the nested state diagram which helps in modelling the complex system which the flat state diagram is unable to describe.