In this section, we will be discussing the multiprocessor system along with the keynotes that must be considered while scheduling the system with multiple processors.

A multiprocessor is a system with several processors. Well with the presence of multiple processors it becomes complex to design a scheduling algorithm. The multiprocessor system can be categorized into:

Note: The multiprocessing system we are considering have the identical or homogeneous processors in terms of functionality. 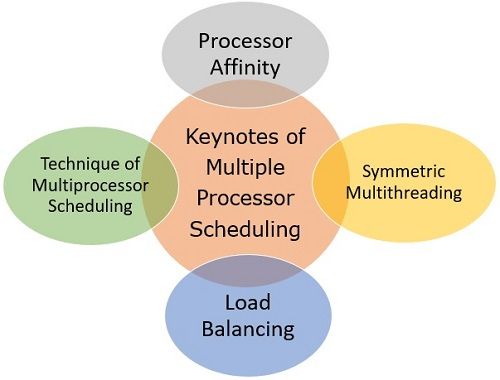 Processor affinity i.e. the process has developed an affinity for the processor it is currently running on. Now let us discover why did this happen?

Load balancing can be implemented on the system with multiple processors, where every processor in the system has its own list of processes to execute.

If the system has a common list containing the processes to execute then there is no need for load balancing. This is because whenever a processor will become idle it will load itself with the process in a common list.

Pull Migration: Here the idle processor itself extract a waiting process form an overloaded or busy processor start executing it to balance the load.

The push and pull migration can be implemented in parallel. For example, Linux system runs it push migration in every 200 milliseconds and whenever a processor is found idle it runs it pull migration algorithm to pull processes from overloaded processors.

So there is no perfect strategy or rule to decide the best policy for scheduling a system with multiple processors to extract maximum benefit. 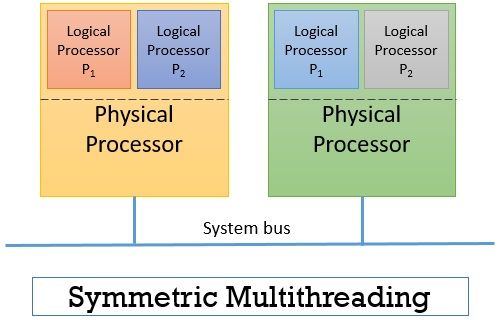 The figure above shows you the view of two physical processors where each of them has created two logical processors. Here from the operating system’s view, there are four processors to schedule.

The concept of symmetric multithreading is more of hardware rather than software. It is the hardware which is designed in a way that it could provide architecture state to each logical processor along with interrupt handling. Though the operating system must not be designed differently to achieve the goal of symmetric multithreading.  But if OS is designed differently to run on such system then it can give performance gain.

Instead, it should schedule two separate threads on two different physical processors.