Let us understand the scenario with the help of a real-life example:

If the owner has to expand his business, he has to hire more people. Hiring more people will distribute the workload and allow him to finish the jobs faster. He will also be able to increase his capacity for doing jobs. Or we can say he will able to accept more jobs than earlier. This strategy is similar to parallel processing.

Growing more if this entrepreneur opens up his branch offices and distributes different functions to different branches in order to work more efficiently. Then this strategy will be similar to distributed computing. Here, we will discuss parallel processing in brief.

As we discussed above parallel processing breaks the task or a process into sub-tasks and distribute these sub-tasks among all the available processors present in the system. Thereby, executing the task in the shortest time.

Suppose there are ten processors in the system and if the user is aware of this. Then he will always try to divide his job into ten subparts. But doing this will create a problem for the created application. If the application is ported on another system where there are only 8 processors. Ultimately here the job will either fail or it needs to be rewritten.

In the following figure, you can see the bus-based architecture where the processors P1, P2, P3, share the memory using a single bus. 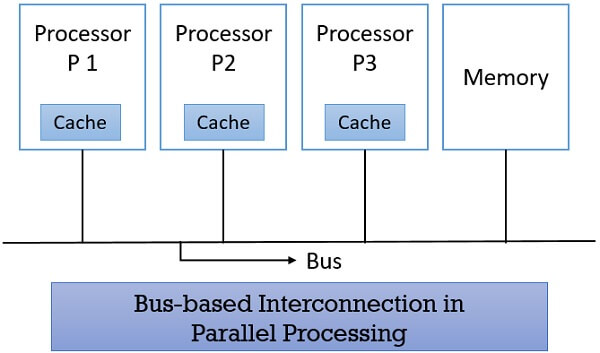 Think, if the processor wouldn’t have the cache memory, then the system would have been bounded to the bandwidth of the bus. As there will always be one of the processor present accessing the bus to read the shared memory. So other processors would have to wait until the bus is free and have to sit idle most of the time waiting for the availability of the bus. 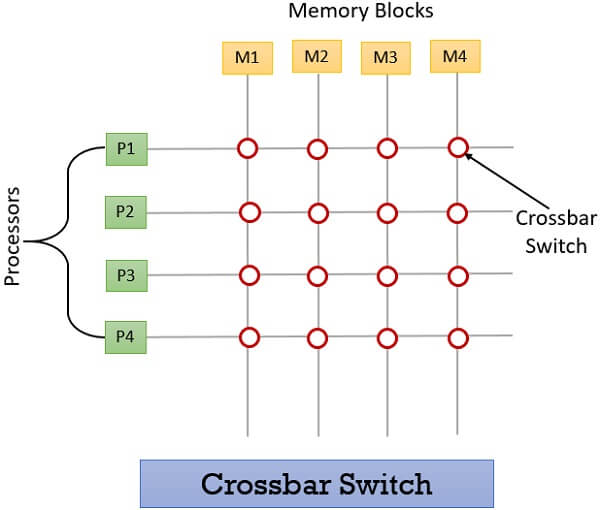 Following this strategy, the shared memory is split into the number of memory blocks. Each processor in the system has access to all the divided memory blocks. But there is one limitation, two processors can never access the same memory block at the specific time.

To understand the scenario, of using the crossbar switch in parallel processing. Consider that we have 4 processors P1, P2, P3, P4 and we have divided the shared memory into 4 parts M1, M2, M3, M4.

There is a solution to this problem, we can arrange a memory block and processor in such a way that the particular processor has to access a specific memory block most of the time. Following this strategy can allow us to have as many processors as needed.

It says if there are n processors in the system. Then each processor would be connected to log n base 2. Here each processor has its own memory and other I/O devices. We can say that each processor here is a complete computer. There has been a lot of research done on this type of systems. Below is the diagram of an eight-node hypercube. Processor P1 here is connected to processor P2, P8 and P4. 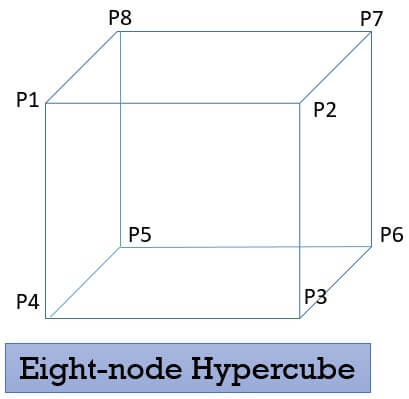 Here, each processor has its own copy of the operating system, memory, file system and I/O devices. It is an ideal hypercube architecture where each node is a computer.

This system can be built using readily available products. But each processor has to run its own operating system and this takes lots of execution time and memory.

There is a one master processor which executes the operating system and consider the other slave processors as a resource like memory or I/O devices. The master processor knows the ability of each processor and allots them resources and task accordingly.

If the master processor fails, then the entire system fails.

In the symmetric operating system, each processor is identical in every sense. All the operating system’s data structures are placed in the global memory and are accessible to all the processors.

Each processor has a microkernel and has limited functionality of performing the basic processing. It is an efficient parallel system. As if one or two processor fails then it will low down the system but won’t let it become standstill.

It is complex, difficult to build and debug.

So this was all about parallel processing and this strategy helps in executing the processes faster than in a single processor system.