Use case model is a high-level abstraction of the interaction model. Use case model defines how the users interact with a system and what functional behavior does the system offers to its users.
Use case model shows the graphical representation of how a user interacts with the system to get a solution to a particular problem for which the system is designed. In this section, we will be discussing the use case model in brief along with its model elements.

What is the Use Case Model?

Elements of Use Case Model

Actors are the one who directly interacts with the system to accomplish a certain goal. An actor can be a person, a device or the other system. An actor is an object or group of objects that behave in a particular way towards the system.

A system may have several actors, it identifies the actor depending on its behavior. Like, for a vending machine, a customer and a repairing technician both are persons but both behave as different actors for the system. For a computer system, the actors are users and administrator.

So, an object can be confined to behave as multiple actors towards the system. In object orientation an object or class can be defined for many different purposes. But, in the use case model, every actor has a well-defined purpose.

This can be understood by the example that though many different persons interact with the vending machine, the machine would categorize them as two actors i.e. customer or repairing technician.

The use cases in the use case model are the interactions between the actors and the system. It can also be summarized as functionality that a system offers to its actor is a use case.

When a customer actor interacts with the vending machine, the use cases would be ‘buying a beverage’. Now a use case may involve one or more than one actor for sure along with the system itself.

For example, a customer buying a beverage involve the customer and the vending machine. While in a telephone system when a user makes a call, it involves two actor’s caller and a receiver. It’s not that in a use case every time the actor will be a person it could be a device or another system as well. Like, when you purchase a stock on an online stock broker. Then the actor would be you as a customer, and a stock exchange. The stock broker system will have to interact with both customer and stock exchange to make a trade.

Use case also includes error condition. For example, the customer has selected the item that is out of stock. So, the warning message will be displayed. Or the transaction that has been cancelled as after submitting the coin and before making any selection the coin return.

Such behavior is considered as an error by the customer. For such an error condition, the designer must plan the behavior sequence. For a system, the errors are the additional behavior that the system could accommodate easily.

Concluding the use case, I would say that a use case incorporates all behavior such as mainline behavior, variations, exceptions, errors and cancellation of request all behaviors that are relevant to a function in the system. Gathering all kind of behavior ensures that the use case has considered all the consequences while interaction.

The figure below shows the use case diagram for a vending machine. 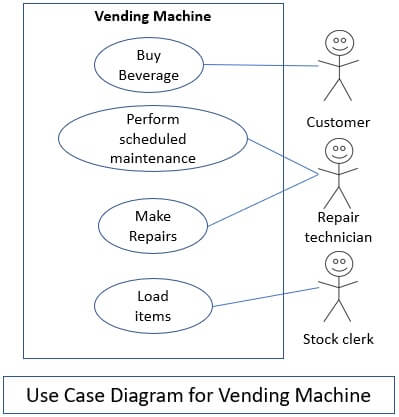