What is Multiple Inheritance?

Multiple inheritance in object orientation is a concept of object modelling where a class is permitted to have multiple parent classes. The child class inherits characteristics from all the parent classes.

The multiple inheritance increases the opportunity of code reusability as all the generalized features will be mentioned once in the parent classes and child class will inherit those features from their parent classes. 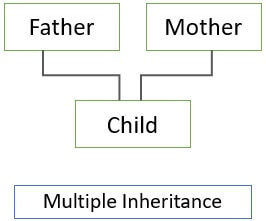 We all know a child always inherits feature of his parents.

The two classes are said to be disjoint when there is no instance that can belong to both of these classes at a time. To understand this, we will take the help of an example. In the figure below, the classes FullTimeEmployee and PartTimeEmpolyee are the disjoint classes as an employee at one time can either be a full-time employee or he can be a part time employee, he can not be both at a time. So, we conclude that the classes FullTimeEmployee and PartTimeEmpolyee are disjoint classes.

If a class can be explored on different independent aspects then you must implement multiple generalization on that class. Like we have refined the class Employee on two aspects, i.e. on the basis of employment status and on the managerial status.

To avoid this kind of ambiguity the attributes must be stated explicitly such as PartTimeEmployee.PersonName and IndividualContributor.Title.

Let us take an example, as you can see in the figure below the class LandVehicle and the class WaterVehicle are the overlapping classes as there are some vehicles that can travel on both, land as well as water. So, a vehicle can be both lands as well as water vehicle.

This denotes delegation using the composition of parts.

2. Inherit the Important and Delegate the Rest

If a class can be explored in many aspects then explore it on one aspect completely first and then explore the other. This approach retrieves all the possible combinations.

A subclass may have more than one super class and all may be of equal importance then using delegation is the best method to preserve the symmetry of the model.

If there is one dominating superclass then preserve the inheritance through that path.

The nested generalization must be implemented sequentially, the most important aspect is explored first, then second and so on.

The nested generalization reduces the quantities of code.

9. Identity
Preserve the identity in the class model using a nested generalization.