To achieve one-to-one communication between the nodes a point-to-point connection can be established but this is literally impractical when it comes to large networks. A point-to-point network increases the number of links in the network which increases the cost of the infrastructure.

The length of links also puts a limitation on the size of the network. Moreover, most of the links in the network are idle when there is no communication between the nodes. So, an alternative option to avoid this is switching.

Switched network routes data from one node to another node by switching it through the nodes. The nodes are also referred to as switches. The switches are able to create a temporary connection between the two end nodes that are linked through these switches. 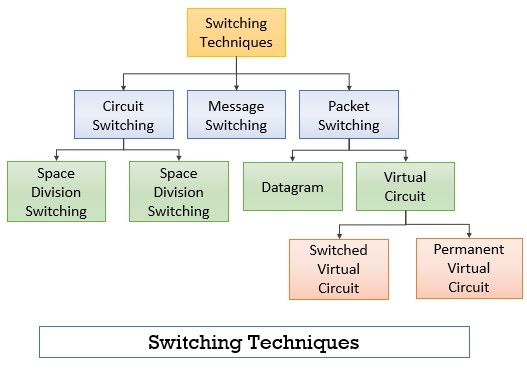 Now the switching can be performed in three different ways circuit switching, packet switching, and message switching. The first two techniques are common nowadays. Still, we will study all three techniques.

In circuit switching, whenever a source end node wants to send a message to the destination end node a physical link has to be established between the source and the destination.

Once the link is established the entire message is transmitted from source to destination through this link. Remember the messages are not divided into packets here. After the message is transferred the source node informs the network to open all the switches to terminate this physical link.

Next time when the same source and destination have to communicate again, they have to establish a dedicated physical link between them before they start communication and have to terminate the link after the communication gets completed.

In message switching, no dedicated physical link is established between the sender and the receiver end nodes during the communication. Instead, the message is forwarded in a hop-to-hop fashion.

In the packet switching technique, the whole message is split to form small packets. Now, these packets are transmitted one by one from sender to the receiver through the intermediatory switches in the network.

Still, the intermediatory switches in the network require some mechanism to route the packets from source to destination and for this, packet switching employs two techniques i.e., datagram and virtual circuit switching.

Establishing a PVC connection is costlier as compared to an SVC connection as the sender and receiver both have to pay for the connection even if they are not communicating.