Mobile IP is a communication protocol that enables a host to move from one network to another while still being connected to its home network. Mobile IP allows a mobile host to communicate with the remote host being in a foreign network. It is the improvised version of Internetworking Protocol (IP) that boosts mobile communication.

Why do we need Mobile IP?

What if the host moved to another network?
Its IP address would no longer be valid and the host would not be able to communicate with any remote host.

Thus, we need to modify the structure of the IP address. The two proposed solutions to modify IP address are:

Changing the IP address each time the host enters a new network. This attempt was not as successful as it has several drawbacks. Every time the computer enters a new network it has to reboot. We have to keep revising the DNS table to let every host on the internet have knowledge about changes. Each time we have to change the configuration files. If the host moves to another network in-between the transmission of data, the data exchange would be interrupted.

This solution is more feasible here, a host will have two addresses:

The second solution contributes to the design of Mobile IP. It allows a host to move to another network by maintaining its original IP address and still is able to communicate with the remote hosts over the internet.

What is Mobile IP?

Mobile IP is an improvised version of IP that allows a mobile host to move from one network to another. The Mobile IP address includes two addresses:

The functional entities in the Mobile IP protocol are: 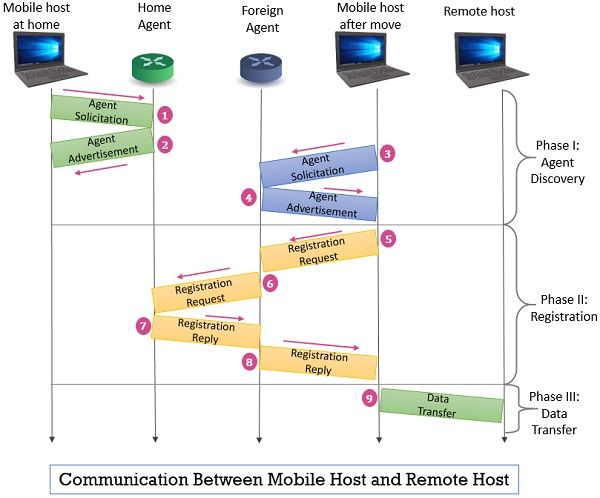 Agent discovery is the first phase and requires the involvement of a mobile host, a home agent and a foreign agent. This phase also has two sub-phases as described below:

Mobile IP does not create a new packet for agent solicitation instead it uses the router solicitation ICMP packet.

The mobile host sends the registration request to the foreign agent declaring its chosen ‘care-of address’. Along with this it also declares its ‘home address’ and ‘home agent’s address’. When a foreign agent receives the registration request message, it registers that mobile host and further forwards the message to the ‘home agent’ in the IP packet.

The reply packet is sent from the ‘home agent’ to the ‘mobile host’ via a ‘foreign agent’. This registration reply has the confirmation of whether the request is accepted or denied.

Now finally, after the agent discovery and registration process, the mobile host is in the foreign network and can communicate with the remote host. Let us see how?

Consider that the ‘remote host’ wants to send a data packet to the ‘mobile host’ unaware that the mobile host is not in its home network.

The foreign agent receives the packet, removes the encapsulation and sees the home address of the mobile host in the destination address field of the original packet sent by the remote host. The foreign agent reviews its registry table, observes which care-of address has been registered to the corresponding home address, and then forwards the corresponding mobile host packet. 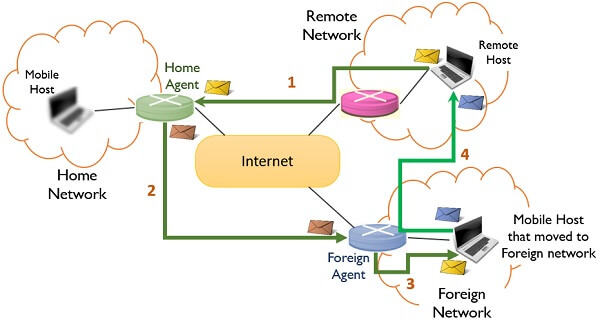 The movement of a mobile host from one network to another is transparent to the entire internet as the internet is totally unaware of the movements of the host.

Advantages and Disadvantages of Mobile IP

So, this is all about mobile IP that allows mobile communication i.e. a mobile host can communicate with a remote host without losing the connection with the home network.