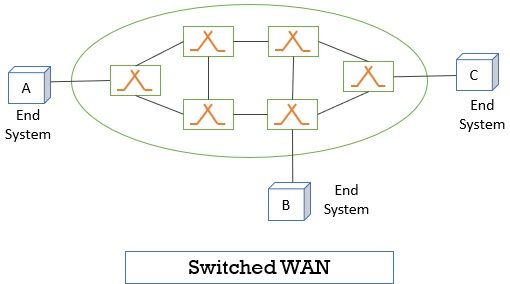 Switched WAN network uses a connection-oriented technology where the switches are used to establish the path between source and destination node.

If a source node wants to send data to the destination node at first a path is established between them and then the data is transmitted over the established path. Once the communication is over the path between the sender and receiver is terminated.

Once the message is transferred the source node informs the network to terminate the connection. The circuit switching is always applied at the physical layer.

In packet switching the entire message to be transmitted is divided into small chunks which refer to as a packet. Now each packet travels the optimum route from source to destination.

At the destination, all the packets are assembled and then forwarded to the upper layer. The packet switching is performed at the network layer.

So, these are the kinds of switching that can be used to implement switched WAN network. Now let us move towards the switched WAN technologies.

X.25 is the first switched WAN which was introduced in the year 1970 and is a packet-switched WAN network. In circuit switching, there is a committed path between the two communicating end nodes.

While in the packet switching the data has to be organized into the packets for transmission over the network. So, a certain level of cooperation is required between the end nodes and the network through which the packets have to be transmitted.

The X.25 specifies the set of protocols that defines communication in the packet-switched wide area network. X.25 carries the IP packets between the two end nodes of a wired area network.

But the IP is a network layer protocol and IP packets have to be carried inside the frame at the data link layer. But as X.25 was introduced before the evolution of the OSI model, it is a three-layer protocol i.e., it is comprised of its own network layer.

So, now the IP packet has to be first enclosed in the X.25 network layer packet and this is further encapsulated into frames at the data link layer.

The X.25 protocol suite was introduced when there were no reliable transmission media. That’s why it has a strong error control mechanism. And due to this the X.25 provides slow transmission which gives the reason for its replacement. X.25 was later replaced frame relay protocol.

In frame relay as such, there are no specifications for the physical layer. The implementer can make use of whatever is available as it supports all the protocols identified by ANSI. At the data link layer, the error detection mechanism is implemented and the error control mechanism is left for the upper layers.

Let us overview the advantages of frame relay over the X.25 standard.

The ATM is referred to as a cell relay protocol. ATM is a standard used to implement a switched WAN which uses packet switching technology. Similar to X.25 and frame relay ATM also transmits data in small chunks which is referred to as cells.

The ATM uses fixed-sized and fixed-format cells which improves the transmission speed of the cells over the high-speed network. Entire data is packed into fixed-sized cells. The cells from different end nodes are multiplexed using asynchronous time-division multiplexing and are routed over the transmission path.

All cells from the same message travel through the same virtual circuit and maintain the same order till they reach the destination node.

So, this is all about the switched WAN that connects several end nodes. The switch WAN network makes use of switches to create a wide area network.