In this section, we will discuss the transmission of IP datagram over the switched ATM WAN network which is a connection-oriented technology.

There were six designing goals for the designer of ATM which are listed below:

At the source computer, the data to be transmitted is loaded into these identical cells. These cells are then multiplexed with the other cells and routed through the ATM network. ATM uses asynchronous time-division multiplexing to multiplex the cells coming from different links. 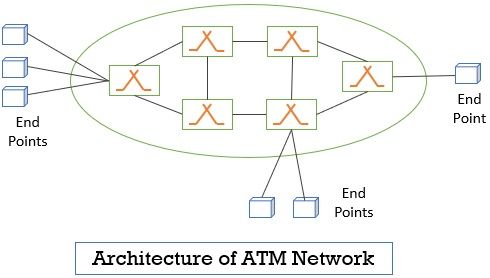 In the ATM network, all the cells belonging to the same IP datagram follow the same virtual circuit and they also maintain their sequence till they reach the destination.

The ATM standard defines three layers application adaption layer (AAL), ATM layer, and physical layer. The endpoints in ATM network uses all these three layers and switches inside the network using only physical and ATM layer.

The ATM layer offers services such as routing cells from one endpoint of the ATM network to another endpoint, multiplexing cells from different channels, managing traffic over the network, and switching.

The AAL layer provides an interface to the existing network. AAL layer accepts the data packets from different networks and maps them into ATM cells. This transmitted data can either be audio, video, data, or voice, and even each datatype may have a different transmission rate. At the receiver end, these cells are again reassembled into their original format.

There are four kinds of AAL layer but AAL5 is the most important AAL layer. It is also referred to as a simple and efficient adaption layer (SEAL). AAL5 is used to transmit IP packets on the Internet.

IP address: Every router connected to the ATM network has an IP address that defines that router in the IP layer. ATM network

Virtual Circuit Identifier (VCI): Virtual circuit identifier defines the connection between the entry-point router and exit point router. It is denoted by the pair of identifiers (VPI, VCI) as we have seen above.

Now let us discuss how to route the cell in the ATM network step by step.

The entry-point router uses its routing table to map the destination IP address to the IP address of the next router.