We have three versions of this IGMP protocol where the IGMPv3 is compatible with the older versions IGMPv1 and IGMPv2. In this section, we will discuss how the IGMP protocol manages the active and inactive members of a multicast group. We will also see the types of messages the IGMP protocol uses for this multicast communication.

Note: The membership report message is sent twice just one after another within a very short interval as in case the first one is lost or damaged at least the second message would do.

This special query message has a group Id or the multicast address referring to the enquired group and sets a specific time for the hosts to reply. If this specific duration no host or network claims its interest in the group the multicast router purge this group from its list.

Well, there is a solution for it, the multicast router sends a general query message at a periodic interval to all hosts or routers. This enquire a host about all the groups it is involved in and the host has to answer for all the group it is involved in. The enquired host or router responds using the membership report message.

When a router or a host receives a general query message it sets a timer using a random number between 1 and 10 seconds. Each host or router set the timer for each group it is involved in.

The host or router lets this timer expire before responding to the query message and this delay reduces the traffic. But how? Consider that the two hosts receiving the query message have an interest in the same group.

Now, host1 has set a timer of 4 seconds and host2 has set a timer of 3 seconds to respond to the same group they are interested in. The timer of host2 will expire first and it would send the membership report for the group. As this report is broadcasted host1 will get to know that there is no need to respond for this group and it cancels the corresponding timer. This we refer to as delayed response which reduces the traffic. 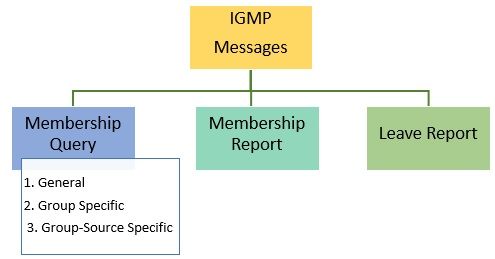 The receiving members of the multicast group send the membership report either in response to the membership query message or if they are registering the group for the first time.

So, this all about the Internet Group Management Protocol. We have seen how it supports multicasting. Few examples where IGMP protocol is in streaming videos or in web conferencing such as Zoom call or Google meet where once source addresses multiple host and routers. The IGMP messages are not sent directly over the network instead they are encapsulated IP packets at the network layer which is further encapsulated in frames at the data link layer.