How to aggregate data in SQL?

Step by step evaluation of the aggregate function in SQL.

Below is the list of all aggregate functions in SQL:

Note: We can name the attribute of the result relation obtained by aggregation using the ‘as’ clause. We can use the ‘as’ clause for all aggregate functions.

How to Use the Aggregate function in SQL?

This aggregate function counts the number of tuples in the relation. It has certain variations: 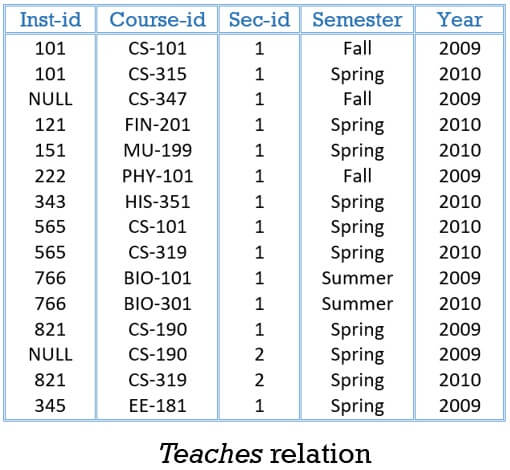 If you want to count the number of instructors in the teaches relation then the query for this would be:

The query above will return 13 as a result. Here the count function avoids Null values.

Next, if we add the distinct keyword in the count function.

This query returns 9 as a ‘distinct’ keyword is used along with the attribute name in the count function. So, it has eliminated the duplicates along with null values.

This query will return 15 as it has counted all the tuples including the Null values.

The AVG() function returns the average of all the tuple values from a single attribute of a relation. Remember the duplicate tuples must retain while computing an average. Else it will show an incorrect answer. This function avoids the ‘Null value’ in its input as it complicates the aggregation. 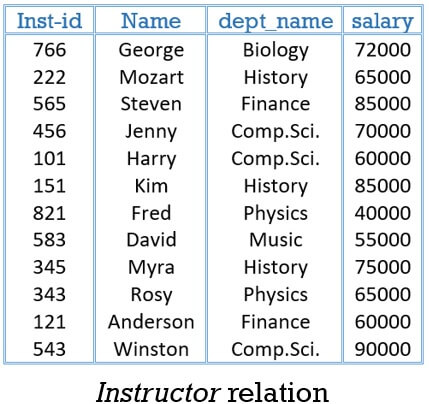 Evaluate “average salary of all the instructors teaching in Comp.Sci. department”.

The result of this query will be a relation with a single attribute carrying a single record. This record holds a numerical value. The numerical value shows the average salary of all instructors teaching in Comp. Sci. department (result 73,333.333).

This function evaluates the maximum value among all the tuple values, of the specified attribute. Like other aggregate functions, the max() avoid the’ null values’ in its input.

The query below will result in the maximum salary of all the instructors.

To find the minimum salary of all instructors in the instructor relation we will write the query:

This function evaluates the sum of all the tuple values, of the specified attribute. Like average function, sum also drives on numerical values only. The sum function avoids the null values.

The query below will find the total salary of all the instructors.

‘Group by’ with Aggregate Function

We can apply aggregate functions to a group formed by the ‘group by clause’. The tuples with the same value for the specified attributes in the ‘group by’ clause lies in one group.

Example of ‘Group by’ Aggregate Function:

So, if we have to calculate the total salary of instructors in each department then the query would be: 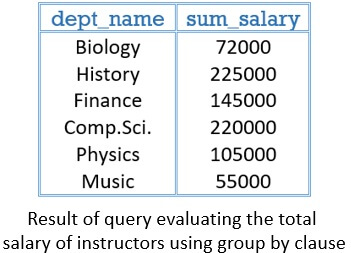 ‘Having’ with Aggregate Function

Having clause is the condition applied to each of the groups formed by the ‘group by’ clause. If the formed groups do not satisfy the condition then they are removed from the result.

Example of ‘Having’ Aggregate Function:

If we want the department names whose total salary of instructors is greater the 72000. Then the query would be:

So this was all about the aggregate functions in SQL. Always apply the sum and average function to the attribute with numerical values.