So, we need a mediator to make the computer communicate with the I/O modules. This mediator is referred to as an interface circuit. Observe the figure below, we can easily see that the one end of the interface circuit is connected to the system bus line i.e., address line, data line, and control line. 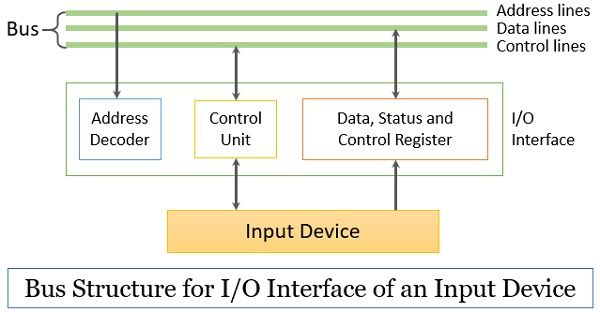 But before discussing these ports let us take a brief outlook of what are the features of the I/O interface circuit.

Now, let us learn about the parallel port and the serial port of the I/O interface circuit.

Observe the parallel input port that connects the keyboard to the processor. Now, whenever the key is tapped on the keyboard an electrical connection is established that generates an electrical signal. This signal is encoded by the encoder to convert it into ASCII code for the corresponding character pressed at the keyboard. 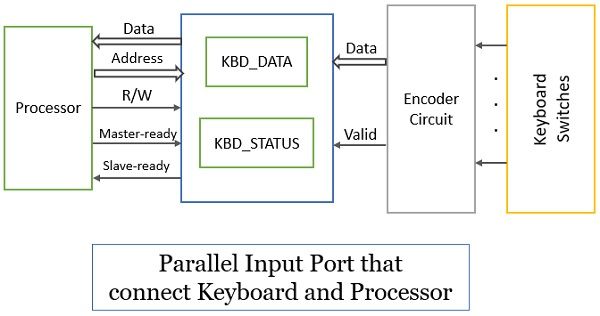 The encoder then outputs one byte of data that presents the character encoded by the encoder along with one valid bit. This valid bit changes its status from 0 to 1 when the key is pressed. So, when the valid bit is 1 the ASCII code of the corresponding character is loaded to the KBD_DATA register of the input interface circuit.

Now, when the data is loaded into the KBD_DATA register the KIN status flag present in the KBD_STATUS register is set to1. Which causes the processor to read the data from KBD_DATA.

Once the processor reads the data from KBD_DATA register the KIN flag is again set to 0. Here the input interface is connected to the processor using an asynchronous bus.

The bus connecting processor and interface has one more control line i.e., R/W which is set to one for reading operation.

Observe the output interface shown in the figure below that connects the display and processor. The display device uses two handshake signals that are ready and new data and the other master and slave-ready. 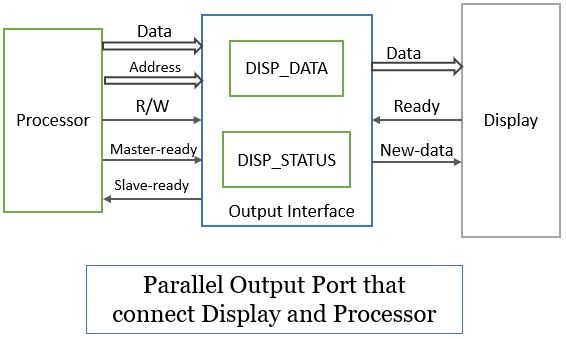 When the display unit is ready to display a character, it activates its ready line to 1 which setups the DOUT flag in the DISP_STATUS register to 1. This indicates the processor and the processor places the character to the DISP_DATA register. 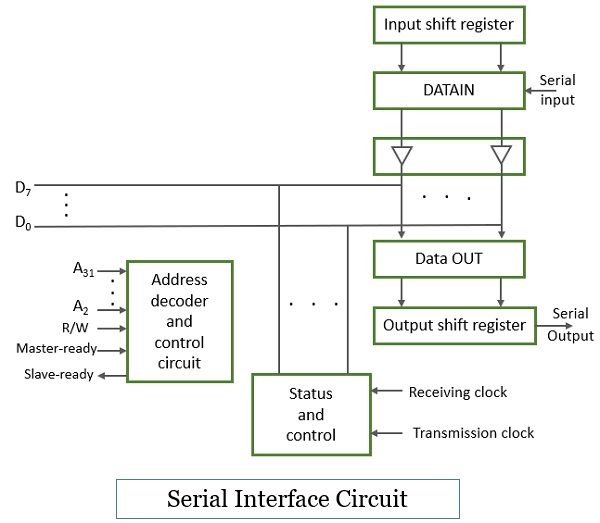 The serial interface port connected to the processor via system bus functions similarly to the parallel port. The status and control block has two status flags SIN and SOUT. The SIN flag is set to 1 when the I/O device inputs the data into the DATA IN register through the input shift register and the SIN flag is cleared to 0 when the processor reads the data from the DATA IN register.

The serial interface does not have any clock line to carry timing information. So, the timing information must be embedded with the transmitted data using the encoding scheme. There are two techniques to do this.

The data received at the receiver end is recognized by this start and stop bit. This approach is useful where is the transmission is slow.

The start and stop bit we used in the asynchronous transmission provides the correct timing information but this approach is not useful where the transmission speed is high.

So, in the synchronous transmission, the receiver generates the clock that is synchronized with the clock of the transmitter. This lets the transmitting large blocks of data at a high speed.