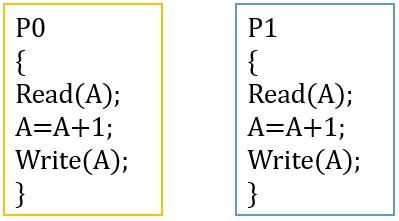 Look at the figure above, suppose there are two processes P0 and P1. Both share a common variable A=0. While accessing A both the processes increments the value of A by 1.

The order of execution of the processes is P0, P1 respectively.

Process P0 reads the value of A=0, increments it by 1 (A=1) and writes the incremented value in A.

Now, process P1 reads the value of A =1, increments its value by 1 (A=2) and writes the incremented value in A.

So, after both the processes P0 & P1 finishes accessing the variable A. The value of A is 2.

Consider that process P0 has read the variable A=0. Suddenly context switch happens and P1 takes the charge, and start executing. P1 would increment the value of A (A=1). After execution P1 gives the charge again to P0.

So here, when both the processes P0 & P1 end up accessing the variable A, the value of A =1 which is different from the value of A=2 in the first case.

Now, this type of condition where the sequence of execution of the processes affects the result is called race condition. 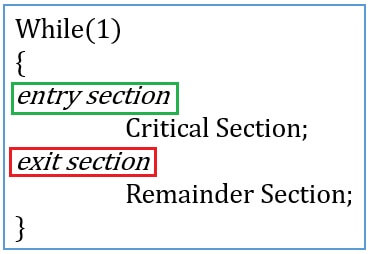 To avoid any inconsistency in the result the three properties that should be considered mandatorily to implement critical section are as follow:

Let us start to search for the solution to implement a critical section successfully. Though we have to find the solution for n number of processes but, let start with just two processes to make the understanding better and easy.

In the figure below you can see that we have two processes P0 and P1. Both have code to enter their critical section.

Suppose the value of turn is 0. Now, the process P0 tries to enter its critical section, it executes while(1) and further checks for the condition while (turn!=0)which turn out false. So, it exit while loop and enter the critical section and on exit make turn=1 and execute the remainder section.

Similarly, P1 checks while (1) and enter the while loop and checks for while (turn! = 1) which turn out to be false. So P1 exit loop and enter critical section then make turn 0 again and execute its remainder section.

Now, let us begin again, P0 execute while(1) which is true so, it enters the loop make flag [0]=T which confirm that P0 want to enter CS. Now P0 checks while(flag[1])to see whether P1 is in its CS, which is false so it exits the loop and enter its CS and on exit make flag[0]=F.

If after executing it’s CS, P1 again wants to reenter its CS, it can, as the condition for entry in CS flag[0]= F. Same is the case with P0. Here we have achieved mutual exclusion +progress.

Consider the case when P0 has just confirmed that it wants to enter CS by making flag[0]=T and just at that moment the context switch happens and P1 get charge and start executing. It makes flag[1]=T and further check for while(flag[0]) which is true now, it will get blocked in the loop and also blocks P0.

Here, we have implemented both flag array and the turn variable, flag[0]=F, flag[1]=F and turn=0.

Now, P1 enter while(1) and make flag[1]=T and turn =0 to confirm its entry in CS. Further checks for while(turn==0 && flag[0]==T) which turn out false as flag[0]=F. So P1 enter CS and on exit make flag[1]=F. Here even, if context switch happens the processes would not get into a deadlock as in the previous case.  This solution is called Peterson’s solution.