Advanced Encryption Standard (AES) was introduced by NIST in 2001 is a symmetric block cipher which overcomes the key size weakness of DES. AES comes with the variable key sizes i.e. 128-bit key, 192-bit key and a 256-bit key. AES does not follow the Feistel structure in fact it operates on entire plaintext block at once instead of dividing them into two halves.

AES can be applied in both hardware and software. In this section, we will discuss the encryption and decryption process of AES in detail. We will also discuss the round function of AES in brief.

What is Advanced Encryption Standard (AES)?

Let us discuss some key point before moving to the encryption process of AES.

Knowing the Key points of AES now, let’s discuss the encryption process in AES in details. Observe the figure given below. 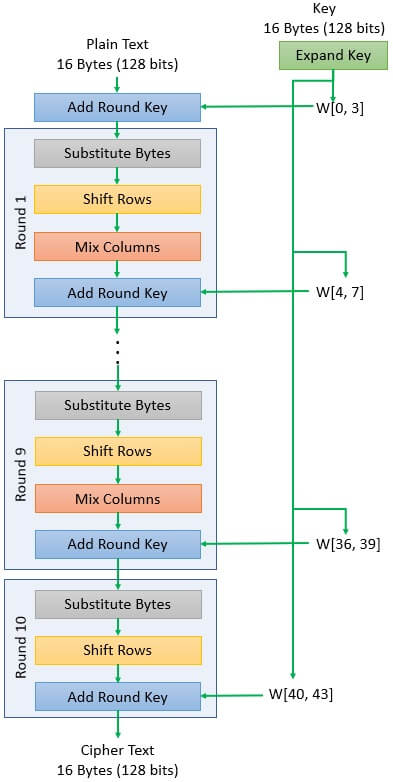 Step 2: At the very first of encryption process the 16-byte plain text block or 4-word plain text block is XORed with the 4-word key i.e. W0, W1, W2, W3. The resultant of this XOR is provided to the 1st round.

Step 3: In the first round, the result of XOR is processed by the Substitute Bytes, Shift Rows, Mix Column and Add Round Key functions in the respective sequence.

To the Add Round Key function, the next 4 words from the expanded key are provided that are W4, W5, W6, W7. The corresponding result of first-round is provided to the second round.

Step 4: All round till round nine, performs the same functions and in each round, a distinct key is provided from the expanded key. In round ten only three functions are performed on the input provided by round 9 that are Substitute Bytes, Shift Rows and Add Round Key function.
The result of round 10 is the cipher text block of the corresponding pain text block.

Each round function has four stages or four functions those are as follows:

The input to Substitute Byte is a 4X4 state matrix of 16 bytes where each element of the matrix is of 1 byte. Now AES has defined a 16X16 matrix namely S-box which contains a permutation of 256 8-bit values.

The Substitute Bytes function maps each byte element of state matrix to the new value using the following procedure. 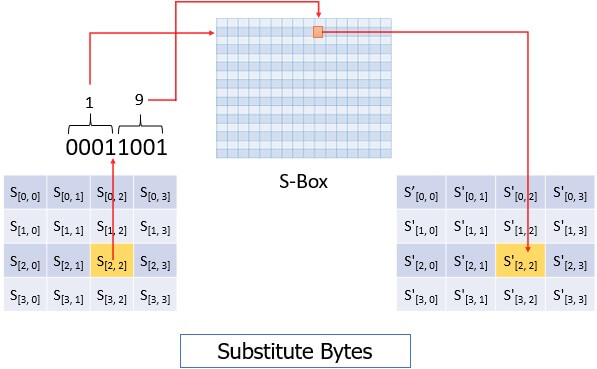 Step 2: This row value and column value act as an index to get the new value from the S Box.

The input 4X4 state matrix is multiplied with a constant predefined matrix as you can see in the figure below:

Add Round Key function is a column-wise function, a 4-byte state matrix column is XORed with a 4-byte word of a key. It can also be taken as byte-level function.

AES Encryption and  AES Decryption process are the same and it also starts with the Add Round Key Function. The 16-byte cipher text in the form of 4X4 state matrix is XORed with the unique 4-word key.

The key sequence in encryption is reversed during the decryption. And all the other round functions are also inversed in the decryption process to retrieve the original 16-byte plain text block.

The key used in AES if not employed properly it can cause a cryptanalytic attack. Therefore, key scheduling should be done carefully.

So, this is all about AES it’s encryption, decryption and key scheduling. AES provides the best result if key scheduling is done properly.