The electromagnetic wave is nothing but the moving electrons that propagates information from one point to the another through the air or even in a vacuum. An antenna is an electronic conductor that has the ability to transmit these electromagnetic waves and it can even receive these waves.

The unguided media propagates electromagnetic wave from source to destination in three methods:

In the ground propagation, the electromagnetic wave is propagated close to the atmosphere i.e. between ionosphere and earth surface. These electromagnetic waves are the low-frequency wave that is transmitted in all direction and the wave follows the curvature of the earth as you can see in the image below.

The distance travel by the electromagnetic wave in the ground propagation depends on the power of the propagated signal. More is power in signal longer the distance it travels. 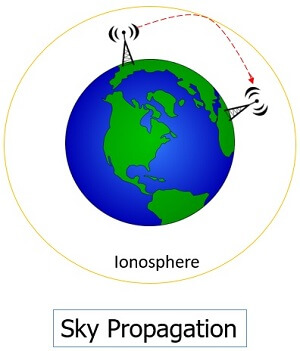 In the line of sight propagation, the electromagnetic wave with very high frequency is transmitted in the ‘straight-line’ direction from the transmitter antenna to the receiver antenna. 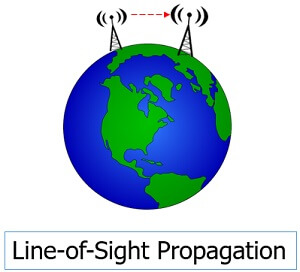 In this way, the electromagnetic wave does not get affected by the curvature of the earth because the transmitter and receiver antenna are either tall or close enough to maintain the line of sight.

The radio waves are propagated in sky mode and are omnidirectional which means that the source transmitter transmits the radio wave in the sky and they are reflected from the sky and received by the receiving antenna.

Being omnidirectional in nature the radio waves can face issues such as interference if another transmitting antenna is also sending a signal with the same frequency or bandwidth.

The microwave is the electromagnetic waves with frequency ranging from ‘1 to 300 GHz’. The microwaves are unidirectional in nature and due to which it propagates in line-of-sight mode. In line-of-sight propagation, the source transmitting antenna and the receiving antenna needs to aligned to each other in such a way that they must be facing each other which enables point-to-point transmission.

The microwave transmission can be classified into two types:

Infrared wave is the high-frequency wave ranging from ‘300 GHz to 400 THz’. The infrared transmission uses line-of-sight propagation and thereby is used for short-distance communication.

As the infrared transmission is the high-frequency waves, they cannot penetrate the wall so you can easily differentiate the communication going on inside the building and the communication outside a building. In this way, there are no chances of interferences.

The most popular example of infrared transmission that we daily come across is your remote that you use to operate AC, television, music system, etc. The remote emits infrared waves which are received by the television and according to perform the action.

When it comes to security the infrared waves are more secure as there is no chance of eavesdropping because the infrared wave does not even penetrate the wall. Therefore, you do not even require a license to use infrared transmission.

So, these all are types of unguided transmission media. We have also learnt about the modes of propagation that provides the way to the electromagnetic wave to travel from source to destination.