A compiler in a computer is defined as a program that intakes a program written in a language say source language and transforms it into the equivalent program but in another language says target language. Apart from this translation the compiler also specifies errors present in the source program. 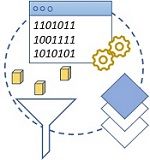 What is a Compiler in a Computer?

Generally, a compiler is used to transform a program in a high language to a program in a low-level language. Apart from this transformation the compiler also specifies the errors present in the source program.

However, there is a wide variety of source languages and target languages. Source language ranges from the traditional programming languages such as Java, C#, Perl, Visual Basic to some specialized languages that have evolved in almost every field of a computer application such as ruby, python.

The target language can also be a programming language or it can be a machine language of a certain computer that ranges in between the microprocessor and a supercomputer.

Depending upon the structure of the compiler or its purpose we can classify compilers as single-pass, two-pass and multi-pass, we will be discussing these types in the section ahead.

Phases of a Compiler 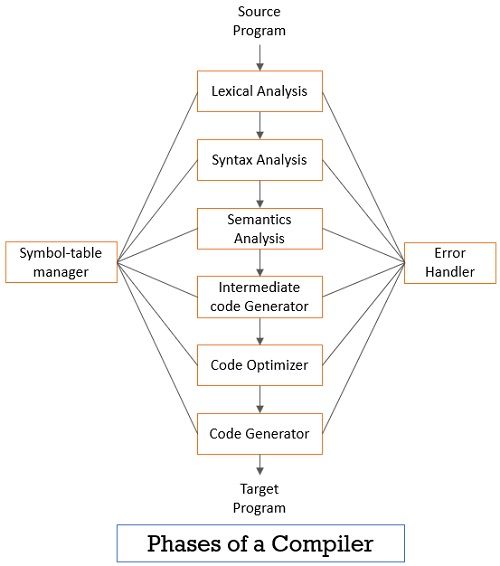 Now how a stream of characters is categorized into tokens?

Let us understand this with the help of an example. Consider a small assignment statement that calculates the interest (simple interest) on the principal amount.

This assignment statement above can be broken into the following tokens.

The spaces separating the characters forming tokens are eliminated during the linear analysis. The lexical analysis phase is followed by syntax analysis.

The syntax analysis phase is also referred to as hierarchical analysis or parsing. In this phase, the tokens formed during the linear analysis stage are grouped into ‘grammatical phrases’ that is is represented with the help of a ‘parse tree’.

So, the tokens formed in the example above are grouped into grammatical phrases. The parse tree in the figure below represents the organization of tokens in a hierarchical way such that they collectively form a meaning. 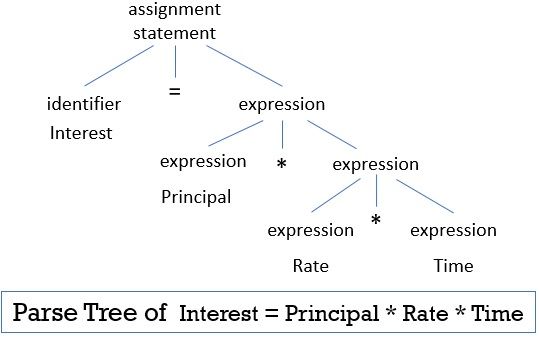 In the above two stages, we have divided the source program into tokens and has organized them hierarchically as represented in the parse tree above. In semantic analysis, certain checks are performed on the components of the program to identify whether these components collectively make meaning or not.

The most important factor of semantic analysis is ‘type checking’. The compiler makes sure that for every operator there are operands that are allowed by the source language.

To maintain the records of all the entities in a program the compiler creates and maintains a data structure that we refer to as a symbol table.

The entities of the program could be:

The symbol table helps in determining the location of each entity present in the program easily and quickly.

The error detection and reporting phase deals with the error detected and let the compiler proceed and detect further errors in the source program.

The intermediate code has several properties as discussed below:

In the code optimization phase, the intermediate code is optimized to make the execution of the target code even faster. During optimization, the meaning of the program does not change. Although the amount of code that has been optimized varies from compiler to compiler.

Note: The code optimization reduces the execution time of the target program but it must not increase the compilation time thereby slowing down the compiler.

The code generation phase is the last phase of the compilation. In this phase, a relocatable machine code or an assembly code is generated which is equivalent to the source program.

The most important part of the code generation phase is to select the memory locations i.e. registers as we require them to assign variables that we use in the program.

In a two-pass compiler, the six phases of the compiler are implemented in two modules.

So, in this way the target code is generated in two passes, that’s why it is called a two-pass compiler.

In a multi-pass compiler, the phases of the compiler are implemented with multiple modules.

Advantages of a Compiler

So, this was the basic discussion about what a compiler in a computer is? What is it used for? How doe it works? What are the types of compilers? We will be discussing more on compilers in our future content.