What is Waterfall Process Model?

So, we can say that this entire software development process behaves like a series of tiny waterfalls, and this is why we refer to this model as the ‘waterfall model’.

The waterfall model divides the entire process of software development into a definite number of stages. The developers then carry out these stages in a sequence, one after another. Every stage produces a well-defined product and forwards it as an input to the next stage. 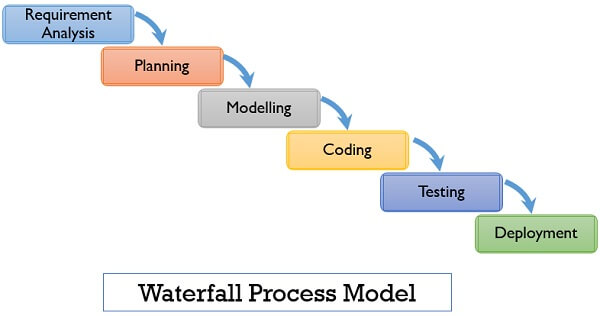 The waterfall model’s phases/steps/stages vary from author to author & people-to-people, though the overall approach is the same. The phases of the waterfall model that we will study are as follow:

Being the first phase at this stage, the software engineer first understands the client’s requirements. What is the client’s problem, and what solution does it require for his problem.

At this stage, the developers schedule the time for modelling, coding, testing & deployment of the software. The developer team also estimate the cost of each phase in this stage. They also plan regarding the hardware requirement, and thus the system architecture is planned at this stage.

The developer constructs logical models at the coding stage by developing small programs, which we refer to as units. These small program units are integrated to form the software.

After final testing, the software is released to the customer or at the market. Along with the software’s deployment, maintenance is also provided to keep the software functional and up to date.

When to Use Waterfall Model?

A variation in the waterfall model was introduced, known as ‘feedback between the adjoining stages’; it resolves the need for the strict waterfall model. 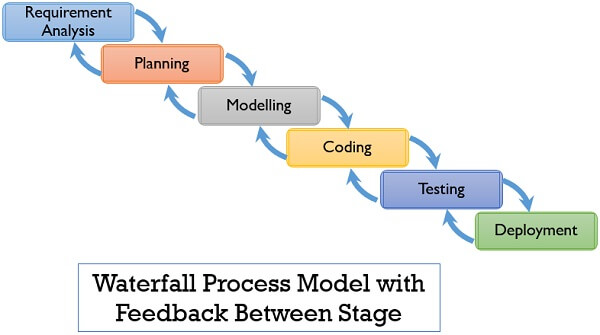 The feedback between the adjoining stages allows correcting the problem uncovered in the previous stage by taking feedback from the current stage. Like, in the testing stage, if an error is detected in the coding stage, it can be resolved by going back to the coding stage.

So, in reality, there is not an exact sequential flow from communication with the client to the deployment of the product. There is frequent feedback on earlier stages.

Advantages and Disadvantages of the Waterfall Model

Advantages of the Waterfall Model