What is Syntax Directed Translation in Compiler Design?

Syntax directed translation (SDT) add ‘semantics rule’ or actions to productions of CFG. Thus we can refer to the grammar after augmentation as attributed grammar.

Now the attribute of a grammar symbol can be numbers, types, table references, or a string. Let us further discuss two kinds of attributes:

We can define the value of a synthesized attribute for a non-terminal symbol (node) N: 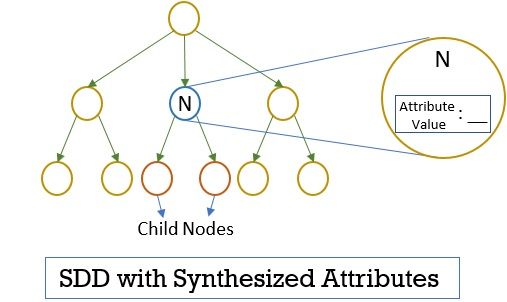 We can define the value of an inherited attribute for a non-terminal symbol (node) N:

Evaluating an SDD at Node of Parse Tree

To evaluate the value of attributes at nodes of a parse tree:

How to Construct Annotated Parse Tree?

Even a dependency graph can determine the order of evaluation of the attributes.

Consider the SDD provided in the figure below. Here we can see the production rules of grammar along with the semantic actions. And the input string provided by the lexical analyzer is 3 * 5 + 4 n. 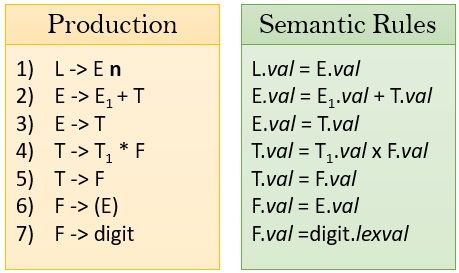 To perform SDT the first thing we must do is to create a parse tree with the provided production and lexical input. 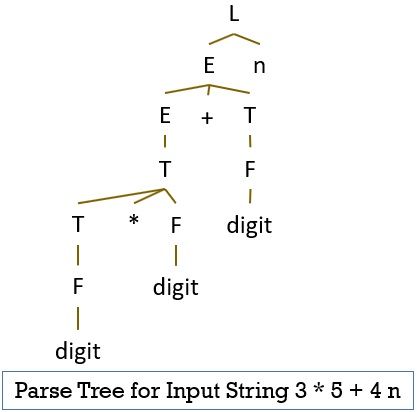 The next step is to create an annotated parse tree. So, we will traverse the parse tree from top to bottom. Then add the semantic rule to evaluate the attribute of each node. Thus, you can evaluate the output for the given input string as you can see in the image below. 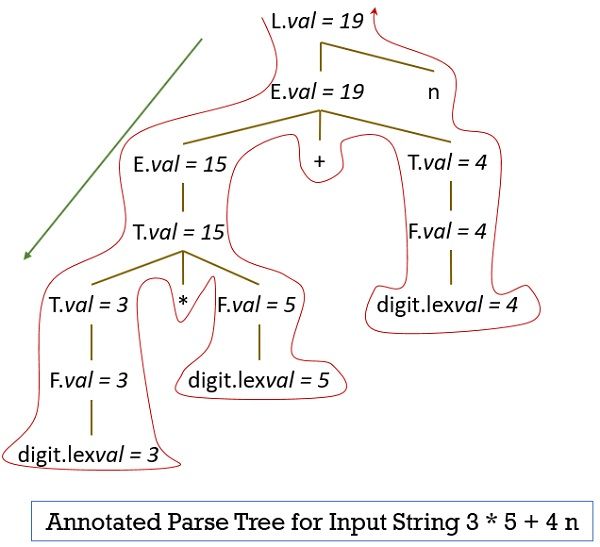 An SDD is S-attributed if the attributes of the node are synthesized attributes. To evaluate S-attributed SDD we can traverse the nodes of the parse tree in any bottom-up order.

In S-attributed SDD the attributes are evaluated by applying post-order traversal. In postorder traversal, node N is evaluated when the traverser traverses node N for the last time.

An SDD is L-attributed if the attributes of nodes are either synthesized or inherited. Here we can traverse the parse tree strictly from left to right. This is because, in ‘L-attributed translation’, L signifies left-to-right traversing.

The SDD in the figure below is L-attributed: 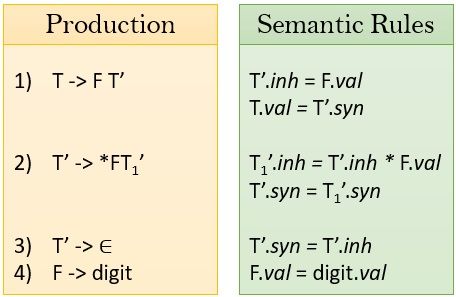 The Annotated parse tree for the L-attributed SDD above is as follow: 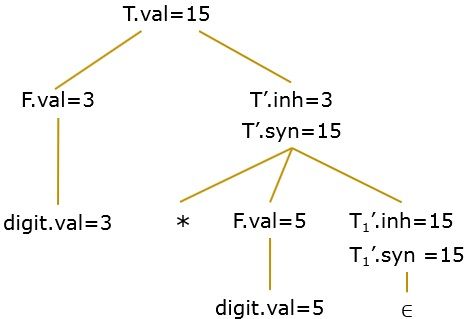 To evaluate the L-attributed SDD, start evaluating the following order:

Thus, we refer to SDT’s with all the semantic actions at the right end of the production rules as postfix SDT’s.

In this scheme, we place the grammar symbol (node) along with its attribute onto the stack. Thus it becomes easy to retrieve attributes and symbols together when the reduction of the corresponding node occurs. As the stack operates in the first-in-last-out mode.

3. SDT’s With Action Inside Productions

In one of the methods, you can even place the semantic action at any position within a production body. The action takes place just after processing all the grammar symbols on the left side of the action.
Such as consider the production B -> X {a} Y;

Here we can perform the semantic action ‘a’ after the processing grammar symbol X (in case X is a terminal).

Or after processing all the symbols derived from X (in case the X is a non-terminal).

To translate the L-attributed SDD into the SDT we have to follow:

We can relate these steps for the SDT with the L-attributed translation.

So this is all about syntax-directed translation. We have learnt about its implementation with the help of an example. We have also discussed some SDT schemes and their applications. The SDT also helps in type checking and even in generating intermediate code. The translation technique also helps in implementing little languages for some specialized tasks.