The spiral model is a software development model. It was Barry Boehm who introduced the model. The model decreases uncertainty at each stage of software development. It incorporates features of both the waterfall model and prototyping model. It is a risk-driven process model and its most important feature is to decrease the risk of the project.

In this section, we discuss the spiral model’s features and its stages or phases. We will discuss the risk handling feature of the model and the situations where we can use the model. We will conclude our content with the advantages and disadvantages of the model.

What is Spiral Process Model in SDLC?

The spiral model is the SDLC model used for developing software. The developers repeat the stages of the model until they obtain a complete version of the software.

The model evaluates risk periodically. It identifies some alternative actions to minimize the risk. The developer chooses one of the best actions and thus has to replan again.

The spiral of a project is active until the software is ‘retired’. So the outer growth of the spiral shows the modification performed on the software.

The crucial characteristic of the spiral model is to identify risk periodically. During the evolution of the software, a developer or a client has to face various kinds of risks such as:

And there can be many more risks involved in the evolution of the software. Well, the spiral model tries to minimize the risk by iterating the cycle multiple times. So, the most important stage or phase of the spiral model is risk analysis.

Let us move to the phases of the spiral model.

In the spiral model each cycle or iteration has to pass through the four general steps which are as follows: 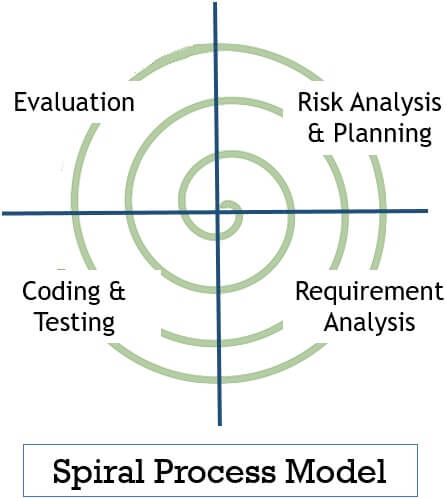 This phase analyzes the client’s requirements. Also, the requirements for developing the product are also established.

The product of this stage is tested to find any error in coding.

The spiral model allows using other process models in one or more of its cycles. This is either to reduce the risk at some stage or to get the requirements of the user clear or for resolving technical risks.

When to use Spiral Model?

Risk handling is a process where the software engineers identify, analyze and control the factors producing the risk. It is the most important feature of the spiral model. The spiral model resolves risk by developing a prototype. The model enables the developer to develop a prototype at any stage in the evolution of the software.

The model considers technical risk at all stages of software development and if these risks are handled carefully it can be reduced before they become problematic. Thus, the model becomes more flexible as compared to the other models of SDLC.