Communication satellites are human-made satellites that work in such a way that the satellite receives a signal from one point on earth, amplifies the signal and send it back to another point earth using transponders. Thus, it creates the communication network between the source that transmitted the signal and receiver.

Communication satellite or the artificial satellite can be considered as the repeater in the sky that repeats the signals in order to extend the communication network and cover a long distance.

A Transponder receives a signal from the source transmitter, amplifies it and reemits it in another frequency thereby avoiding interference between incoming and outgoing signal.

As we all know that the satellites propagate signal wave in the line of sight. The satellite receives the signal from source transmitter, amplifies it and rebroadcast it to the receiver. The rebroadcasted signal aims at a particular area on the earth which we term as a footprint. The signal power at the centre of the footprint is maximum and it decreases gradually as we move out from the footprint.

Now, every communication satellite needs a path to travel around the earth which is termed as ‘orbit’. Orbit can be equatorial, inclined and polar. To determine the orbital period i.e. time required by the satellite to complete one trip around the earth we use Kepler’s law:

The orbital period of a satellite is important while deciding where to locate the satellite. But there is one more constraint i.e. Van Allen belts. This belt has a layer of highly charged particles that are trapped due to the gravity of the earth. If you place any satellite in this belt, then it would be destroyed into particles as it travels through the belt.

Considering the factors above three regions have been identified where the satellite can be placed safely. The figure below shows you the location of each kind of communication satellite. 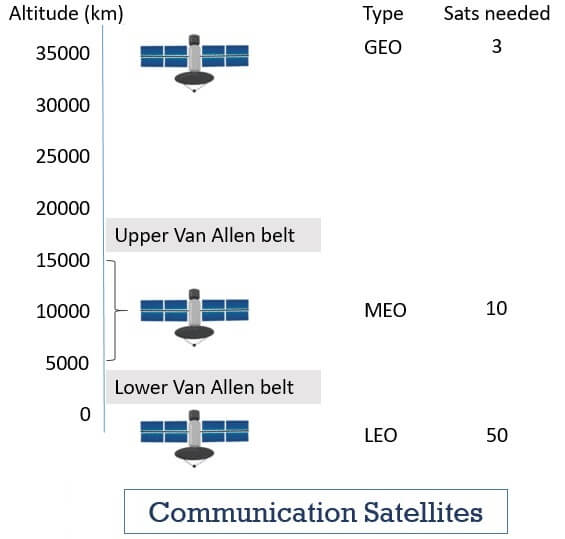 Depending upon the orbit location satellites can be classified into three types.

As it is closer to the earth compared to GEO satellites it emits a smaller footprint. Comparatively, it also requires less powerful transmitters due to the reduced distance between the satellite and earth.

Due to their speed, they don’t appear stationary in the sky and hence they must be tracked. The most popular example of a MEO satellite is GPS (Global Positioning System). GPS is owned by the government of the United States and is operated by their space force. The system includes 24 satellites that are used for navigation purpose over land, sea and air. MEO satellites are not used for the telecommunication.

LEO satellites lie in the lower altitude as compared to MEO. It travels in the polar orbit at an altitude of 500 to 2000 km. As the LEO satellites much closer to earth they have a smaller footprint compared to GEO and MEO, i.e. about 8000 km.

The LEO satellites are much faster than GEO’s and MEO’s they complete their trip around the earth in 90 to 12 minutes. With this information, if we calculate the speed of the LEO satellites it approximately 20,000 km to 25,000 km/hr. Their round-trip delay is a few milliseconds which is acceptable for audio communication.

Further, we can divide the LEO system into three categories

The main advantage of communication satellite is that it provides communication on the remote areas of the earth which are even undeveloped without investing on the ground infrastructure.