This is the fastest yet safest media of transmission. This is even the cost-friendly approach to transfer the data between two computers. The magnetic media have its own speed and cost benefits but there can occur delay in transmission and if you observe the time of transmission is measured in minutes and hours which we nowadays count in seconds.

We all are familiar with the structure of the twisted pair cable. It involves two copper wires that are insulated and are twisted around each other in a helical pattern just like the DNA strands. Though it consists of a pair of wire it acts as a single communication line.

Now, what’s the reason behind twisting the wires. One of the twisted cables is for carrying the ‘signal’ and others complete the ‘ground circuit’. Along with signal, there is interference such as ‘noise’ and ‘crosstalk’ that can affect the signal which may result in generating the ‘unwanted signal’.

If the two wires are kept parallel the unwanted signal created due to noise and cross talk affect them differently as they both are at a different distance corresponding to noise and crosstalk. This results in the difference at the receiver side also.

But when the pair of the cable is twisted then it cancels the difference and let both the wire get equally affected by the interference.

The twisted-pair cable transmits the analog as well as a digital signal. One of the constraints in using the twisted pair cable is the distance for which it can be used efficiently. If you are using twisted pair for transmitting analog transmission then you require amplifier at every 5 to 6 km for maintaining the strength of the signal. If you are using for digital transmission then you require repeater at every 2 to 3 km.

Based on the quality of cable you can categorize the unshielded twisted cable from category 1 as the lowest category to category 7 as the highest category.

The coaxial cable also incorporates two cables for transmitting information from one system to another like the twisted pair cable. But the difference is in their structure and performance. The coaxial cable is able to transmit signal with a higher frequency range.

Let us now discuss the physical structure of the coaxial cable. The coaxial cable has two conductors where there is a one core central insulated conductor that is encapsulated with one hollow cylindrical conductor as you can see in the figure below. 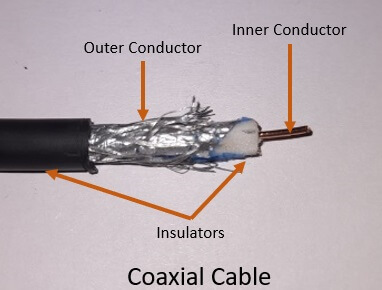 The outer second conductor completes the ground circuit and even prevents noise or other interference. When it comes to the distance the coaxial cable can be used for a longer distance compared to twisted pair cable.

The coaxial cable is used for television cable, telephone connection, the connection between computer, LAN.

Earlier the power line was used for transmitting information from one system to the other. The concept of using power line for high rate communication is in trend again. The power lines are being used for the LAN connection and for internet broadband connection.

Fibre optic cable is a thin fibre made of glass or plastic. It has a diameter thin as human hair. The optical fibre cable has three encasing the core, cladding and jacket. The innermost i.e. core which has one or more thin fibre strands. Now, each of the strands is encased in its own cladding. The cladding is nothing but a glass or plastic coating over the strand. And all these cladded fibres are then encased in a jacket. 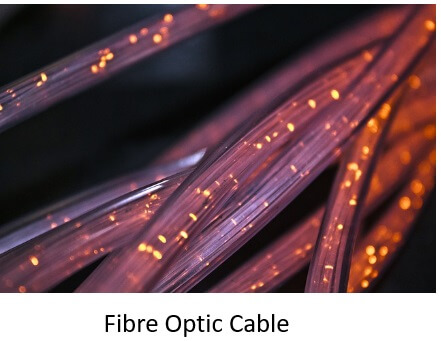 Now for transmitting information via fibre optic cable three components are required that are a light source, a medium for transmission, and a detector. At the sender side, the electrical signals are converted to pulses of light and are transmitted over the optic fibre the light reflects and travel from the core of the fibre.