Shift reduce parsing is the most general form of bottom-up parsing. Here we have an input buffer that holds the input string that is scanned by the parser from left to right. There is also a stack that is used to hold the grammar symbols during parsing.
The bottom of the stack and the right end of the input buffer is marked with the $. Initially, before the parsing starts:
As the parser parses the string from left to right then it shifts zero or more input symbols onto the stack.
The parser continues to shift the input symbol onto the stack until it is filled with a substring. A substring that matches the production body of a nonterminal in the grammar. Then the substring is replaced or reduced by the appropriate nonterminal.
The parser continues shift-reducing until either of the following condition occurs:
To perform the shift-reduce parsing we have to perform the following four functions.

Let us take an example of the shift-reduce parser. Consider that we have a string id * id + id and the grammar for the input string is: 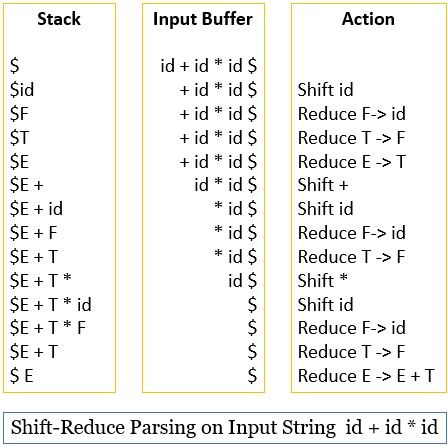 Note: In the shift-reduce parsing a handle always appears on the top of the stack. The handle is a substring that matches the body of production in the grammar. The handle must never appear inside the stack.

The bottom-up parsing is based on the concept of LR(K) parsing.
The LR parser has the following structure: 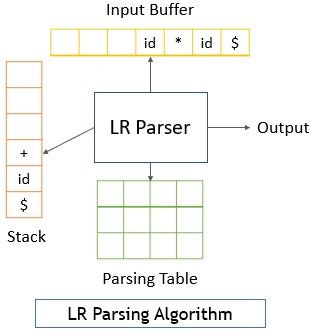 Similar to predictive parsing the end of the input buffer and end of stack has $.
The LR parsing can be classified as: 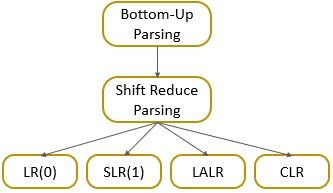 All kinds of LR parsers are the same they only differ in the construction of their parsing table. We will discuss each of them in brief in our future contents.
So, this is all about the Bottom-Up parsing. We have discussed the most general form of bottom-up parsing i.e., shift-reduce bottom-up parsing along with an example. We have discussed the structure of the LR parser and its types.