Remember the top-down parsing cannot handle the grammar with left recursion and ambiguity.

In this section, we will be learning more about top-down parsing, its key problem, its types and its advantages and disadvantages.

What is Top-Down Parsing?

Construction of the parse tree starts from the root node i.e. the start symbol of the grammar. Then using leftmost derivation it derives a string that matches the input string.

Consider the input string provided by the lexical analyzer is ‘abd’  for the following grammar.

The top-down parser will parse the input string ‘abd’ and will start creating the parse tree with the starting symbol ‘S‘. 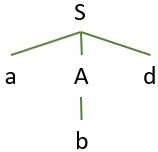 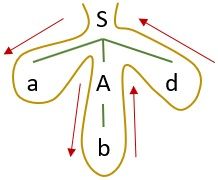 We can perform recursive descent parsing in two ways:

The method that doesn’t need backtracking is referred to as predictive parsing. The figure below illustrates various forms of top-down parsing. 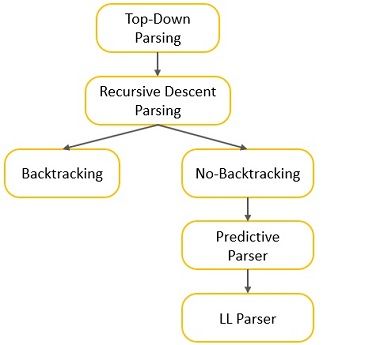 A recursive descent parsing program has a set of procedures. There is one procedure for each of the non-terminal present in the grammar. The parsing starts with the execution of the procedure meant for the starting symbol.

The pseudocode above expresses the procedure for a typical non-terminal. This pseudocode is non-deterministic. This is because it doesn’t specify the method in which the production of a non-terminal must be applied.
In the recursive descent parsing, there may be some cases where we may need backtracking. Backtracking is scanning the provided input string by parser repeatedly.

Note: Backtracking parsers are rarely used. This is because they are quite inefficient in parsing the programing language.

To allow backtracking the above pseudocode requires the following modifications.

For the above grammar, the input string provided to the parser is ‘abcd’.

Here, we have the match for the second input symbol, ‘b’. So, we will advance the input pointer to point next symbol of the input string i.e. ‘c’.

Now, when we compare the third input symbol ‘c’ against the next leaf labelled ‘d’ we get a mismatch. So, the parser needs to go back to the symbol ‘A’ and look for the other alternative.

The other alternative for the production of ‘A’ is ‘bc’. Also, the input pointer has to be backtracked and must be reset to the position where it was first before we expanded the symbol ‘A’. That means the input pointer must point to ‘b’ again.

We will again expand ‘A’ with the next alternative production. Now the leaf of the parse tree label ‘b’ matches the second input symbol ‘b’. 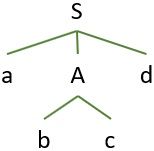 Further, the input pointer is advanced to point to the fourth input symbol ‘d’. This matches the next leaf of the tree labelled ‘d’. 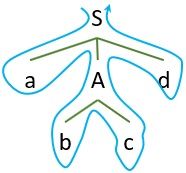 Thus, the parser has produced a parse tree for the provided input string and this completes the parsing process successfully.

Predictive parsing is a simple form of recursive descent parsing. And it requires no backtracking. Instead, it can determine which A-production must be chosen to derive the input string.

Note: In general, we look ahead only for one next input symbol. 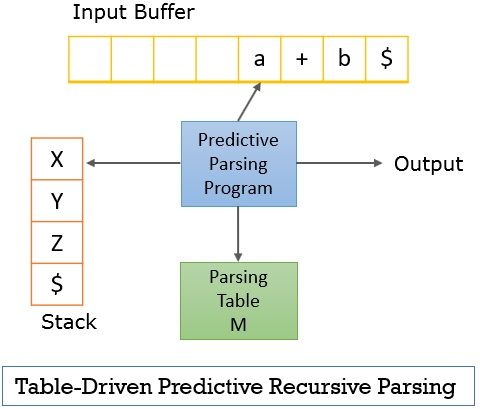 Input buffer and stack both contain the end marker ‘$’. It indicates the bottom of the stack and the end of the input string in the input buffer.

Initially, the grammar symbol on the top of $ is the start symbol. The pseudocode below shows you the working of the predictive top-down parser.

This is how predictive parsing identifies the correct production. So that it can successfully derive the input string.