Black box testing analyzes different categories of errors by testing all the functions of the software. In this section, we will study more about black-box testing, its method of testing, and its techniques, along with its advantages and disadvantages.

What is the Black-Box Testing?

Black box testing is behavioural testing that we employ to test the functionality of the developed software. We do this without going into the control structure of the software. Here, the testers derive all the possible input values for designing the test cases that would examine all the functions of the software. 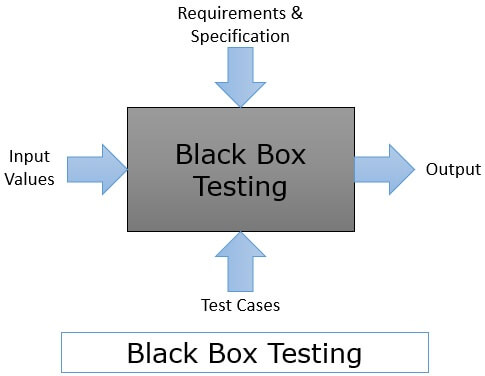 Let’s discuss what types of errors the black-box test identifies.

We implement the black box test at later stages of the testing schedule. Because it deals only with the functional information of the software. While testing with the black box techniques, the testers can answer the questions:

Knowing this much, we will proceed to see the method to exercise the black box testing.

How to Perform Black-Box Testing?

Let us understand the black-box test with the help of an example. Consider we have to perform the black box test on the word processor.

So, the black box test will examine whether the word processor can manage files. The test cases would include whether:

Another test case would be testing editing tools like:

In graph-based testing, initially, we identify all the objects that we modelled in the software. Then we have to identify the relationship between these objects.

Now, the testers identify a series of test cases and implement them on the graph. These test cases exercise all the objects and every possible relationship between them to uncover the errors.

This technique of black-box testing divides the input fields of the program into categories. There can be many input values, and exercising all values while testing becomes a lengthy process.

So, we group the input values, and test representative input from each group. In this way, many inputs can be exercised at once.

Sometimes, we have an application that requires minimum or limited inputs. In such cases, orthogonal array testing is implemented. As the input domains are limited, it is feasible to test all the possible input values from each input domain.

We also call orthogonal array testing as exhaustive testing, as it exhaustively checks all the input values from every input domain of the program.

We perform the regression testing when any kind of updation takes place in software. This testing checks whether the newly patched code does not affect the existing code.