Developing a testing strategy for software is important because if testing is not conducted properly it would lead to wastage of time and effort and it would even be the case that some error or bugs remain undetected. Some general characteristics that should be considered while developing the testing strategy are as follow:

2. Testing must start from the core of the software design and it must progress outward to incorporate testing of the entire software.

3. You should not follow the same strategy to test all the software. Appropriate testing strategies must be developed for different software engineering approach.

5. Though debugging and testing are two distinct jobs; debugging must be incorporated in every testing strategy.

In the image below you can see the levels of testing strategies that are developed to test the entire software. 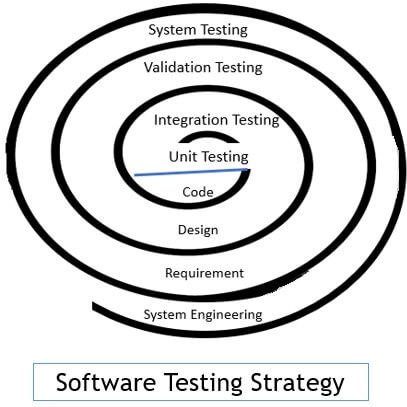 Unit testing focuses on testing the lowest component of the software individually which is also called unit. Unit testing involves the testing of each code segment to ensure that it functions properly.

The unit components are integrated to implement the complete software. Integration testing involves testing the design structure of the software which include modelling and software architecture. It focuses on verifying whether functions of the software are working properly or not.

Validation testing focuses on the testing of software against the requirements specified by the customer.

System testing focuses on testing the entire system as a whole and its other system elements. It tests the performance of the system.