To achieve data abstraction, we will discuss a Three-Schema architecture which abstracts the database at three levels discussed below:

The main objective of this architecture is to have an effective separation between the user interface and the physical database. So, the user never has to be concerned regarding the internal storage of the database and it has a simplified interaction with the database system.

The three-schema architecture defines the view of data at three levels:

It is a level above the physical level. Here, the data is stored in the form of the entity set, entities, their data types, the relationship among the entity sets, user operations performed to retrieve or modify the data and certain constraints on the data. Well adding constraints to the view of data adds the security. As users are restricted to access some particular parts of the database.

It is the developer and database administrator who operates at the logical or the conceptual level.

It is the highest level of data abstraction and exhibits only a part of the whole database. It exhibits the data in which the user is interested. The view level can describe many views of the same data. Here, the user retrieves the information using different application from the database.

The figure below describes the three-schema architecture of the database: 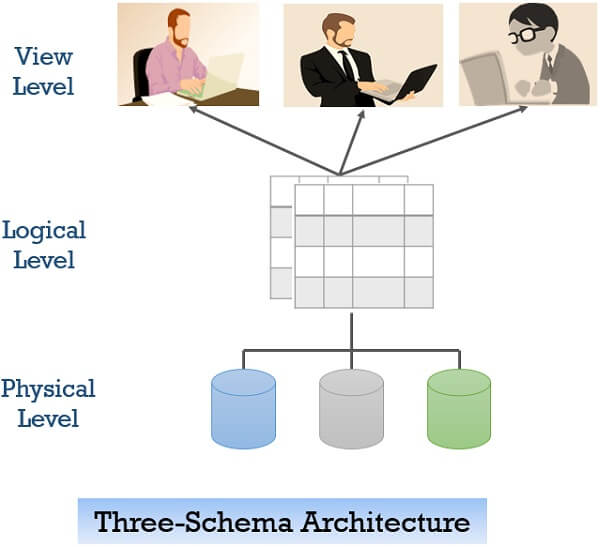 In the figure above you can clearly distinguish between the three levels of abstraction. To understand it more clearly let us take an example:

We have to create a database of a college. Now, what entity sets would be involved? Student, Lecturer, Department, Course and so on…

Now, the entity sets Student, Lecturer, Department, Course will be stored in the storage as the consecutive blocks of the memory location. This is the physical or internal level and is hidden from the programmers but the database administrator is it aware of it.

At the view level, the users have the set of applications which they use to retrieve the data they are interested in.

Well, the changes to data schema at the logical level are made either to enlarge or reduce the database by adding or deleting more entities, entity sets, or changing the constraints on data.

Physical data independence defines the extent up to which the data schema can be changed at the physical or internal level without modifying the data schema at logical and view level.

Well, the physical schema is changed if we add additional storage to the system or we reorganize some files to enhance the retrieval speed of the records.

What is an instance?

We can define an instance as the information stored in the database at a particular point of time. Let us discuss it with the help of an example.

As we discussed above the database comprises of several entity sets and the relationship between them. Now, the data in the database keeps on changing with time. As we keep inserting or deleting the data to and from the database.

Now, at a particular time if we retrieve any information from the database then that corresponds to an instance.

Whenever we talk about the database the developers have to deal with the definition of database and the data in the database.

The definition of a database comprises of the description of what data it would contain what would be the relationship between the data. This definition is the database schema.

So that’s all about the view of data in the database which help us to understand the database from users, developers and database administrator aspects.