What is an Entity?

An entity is an ‘object’ in the ‘actual world’, and that can be identified from the other objects. Here, a question arises that how an entity is different from other entity? For this, we need to know how an entity is expressed.

If you call for a student among a group no one will come until you specify either his name or another distinguishable attribute.

Observe the table below, suppose we have an entity set Student, which is represented by Student Table in the relational model. The entries in the Student table are the entities.

What is Entity Set?

In a database, an entity set is represented by the Table. Below you can see the Student Table which as multiple entries i.e. entity. Now, observe that the two students have the name Jhoson but, still they are uniquely identified as both posses different roll number. 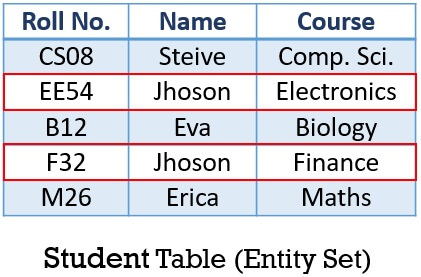 Entity set can be classified into two categories as shown below:

In an ER diagram, the strong entity set is represented by the rectangle. Here, the primary key is underlined with the solid line. 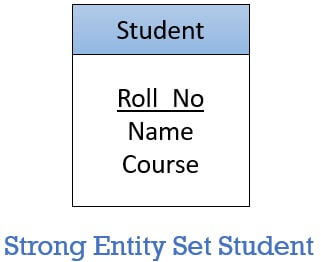 In the figure above, the Student has attributes as Roll_No, Name and Course. Among these attributes, the Roll_No can form a primary key as it is sufficient to identify each entity in student entity set uniquely.

Look at the figure below, we do have two students named Jhoson but they can be distinctly identified because of their roll number. So, the student entity set has a primary key which makes it a strong entity set.

A weak entity set doesn’t have any primary key which can identify each entity in a set distinctly. But, for discriminating the entities in a set, the weak entity set is dependent on a particular strong entity set.

The weak entity gets its primary key combining the partial key of the ‘weak entity’ plus the primary key of identifying ‘strong entity set’.

Let us understand this with an example, we have an entity set section and course. The section has attributes {Sec-id, year, semester}. Now, there can’t be a section without any course. So, it has to be dependent on the course entity set for its existence.

So, this all about the entity set and its classification. While creating the database the entity set, entity attributes must be drawn carefully.