What is Entity in Database?

An entity is a distinguishable real-world  ‘object’ that exists. An object should not be considered as an ‘entity’ until it can be easily identified from all other objects of the real world. In a database, only that ‘thing’ or ‘object’ is considered as an entity about which data can be stored or retrieved.  As if you are not able to store data about some object or if you are not going to retrieve data about some object then there is no point in creating that entity in a database.

In the relational model, each entity sets are represented by a table. So, each row of a table in the database represents an entity. It is essential that a table must not contain duplicate entities as it will lead to ambiguity. Each entity in a table must be uniquely identified which means two entities in a relation, should not contain the same set of values for the same set of attributes. An entity can be anything that exists in real-world like it can be a person, thing, place, object, event,  etc.

The figure below shows the entities in the student table:

As you can see in the figure above we have five entities in the student table. Though we have two students with the same name ‘Jhoson’ we can easily distinguish among them because they have a distinct roll number. So, we conclude that the entities are the real-world objects that are easily distinguishable.

What is Attribute in DBMS?

Attributes describe the characteristics or properties of an entity in a database table. An entity in a database table is defined with the ‘fixed’ set of attributes. For example, if we have to define a student entity then we can define it with the set of attributes like roll number, name, course. The attribute values, of each student entity, will define its characteristics in the table.

In a relational database, we store data in the form of tables. The column header of the table represents the attributes. A table must not have duplicate attributes. Each attribute in a table has a certain domain which allows it to accept a certain ‘set of values’ only. In an entity, each attribute is allowed to have only one value which could be a number, text, date, time etc. (defined in SQL standard).

Attributes have further refinement such as keys. A single attribute or a set of attributes that can distinguish an entity in an entity set/relation is termed as key. In the database, we have a primary key, super key, composite key, foreign key. All of them are created with a certain purpose to normalize a relation in the database.

Observe the figure below it shows the attributes of the student table: 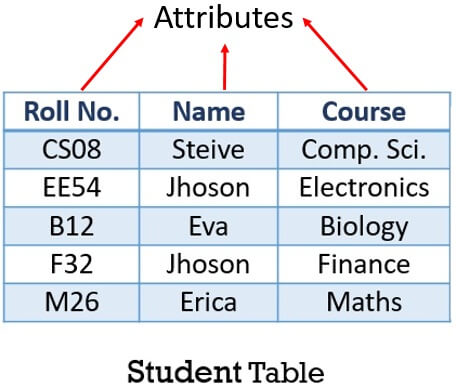 Key Differences Between Entity and Attribute

So, the object that exists in the real world can become an entity only when it is easily identified among other objects of the real-world. And the characteristics that allow an entity to get identified easily are called attributes. Entities in a database are identified on the basis of values its attributes possess.