The transmission control protocol (TCP) is a connection-oriented and reliable transport layer protocol that provides process-to-process communication. Like in user datagram protocol (UDP), we refer to the data transfer unit as user datagram in TCP we refer it to as a segment.

Transmission control protocol i.e. TCP is one of the transport layer protocols that provide process-to-process communication between two communicating hosts on the network. The TCP protocol is connection-oriented so before starting any exchange of data a connection must be established between the sending and receiving host.

Using TCP protocol the sending and receiving host communicate in a full-duplex mode which means the sender and receiver can transmit data at the same time. Now let us discuss the working of TCP.

When two hosts in the network want to communicate using TCP protocol the entire communication can be categorized into three phases as connection establishment, data exchange, and connection termination.

Step 2: The receiver now sends an SYN + ACK segment which has a dual purpose. The first is to send an SYN segment in order to establish communication in the other direction i.e. from receiver to sender. This makes the TCP protocol full-duplex.

The SYN + ACK segment initializes the sequence of the segments from receiver to sender. 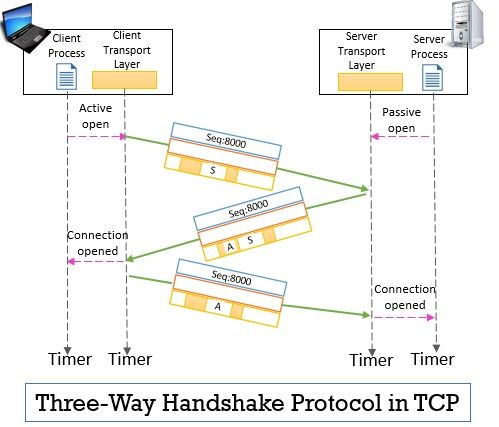 As we know TCP provides process-to-process communication where the process on the source and the destination host is identified by the port number assigned to them.

When the data arrives at its destination the data is delivered to the intended process on the basis of port address.

A receiver may receive data for different processes running on it. At the receiver, TCP demultiplexes the received data and passes it to the corresponding processes.

So this is all about the transmission control protocol. We have learned about its services, working, advantages and disadvantages.