The concept of segmentation in os is similar to paging which is used for memory management. Segmentation divides the user program and the data associated with the program into the number of segments. Well, there is a difference between paging and segmentation in paging each page has an equivalent fixed size whereas segments are of variable size.

What is Segmentation in OS?

Segmentation is used for memory management where user’s view is plotted onto the physical memory. In segmentation, the user program is divided into the number of segments where each segment is of variable size.

Let us now see the implementation of segmentation. As we know in segmentation the user program is divided into the number of segments. And a segment is identified by two components i.e. a segment name and segment offset.

In this section, we will see how this two-dimensional address is mapped onto the one-dimensional physical memory. Like we have page table in paging similarly we have a segment table in segmentation.

Let us understand the workflow of the segment table with the help of the figure given below. 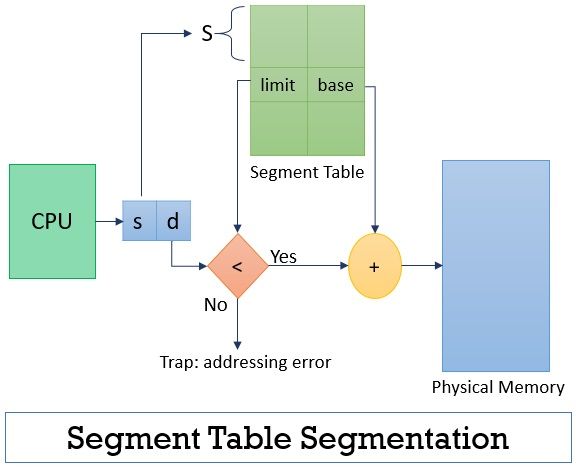 As in the figure above you can see that the CPU calls outs for a segment and logically provides a two-dimensional address for that segment where the first entity s is the segment number (segment name) and its offset d.

Example of Segmentation in OS

Consider that a user program has been divided into five segments and they are numbered from segment 0 to segment 4, as you can see them in the logical address space. You also have a segment table which has entries for these segment with their base address in physical memory and their limit. 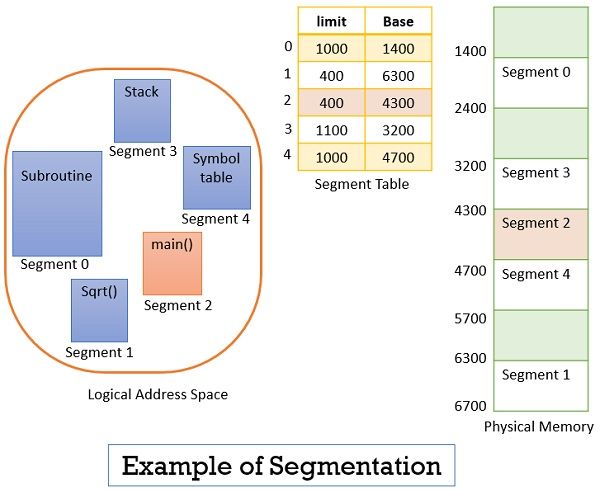 Now suppose the CPU calls for segment number 2 which is 400 bytes long and it resides at 4300 memory location. The CPU wants to refer the 53rd byte of segment 2. So, here the input we get from CPU is segment number 2 and 53 as an offset.