There are several threading issues when we are in a multithreading environment. In this section, we will discuss the threading issues with system calls, cancellation of thread, signal handling, thread pool and thread-specific data.

Along with the threading issues, we will also discuss how these issues can be deal or resolve to retain the benefit of the multithreaded programming environment. 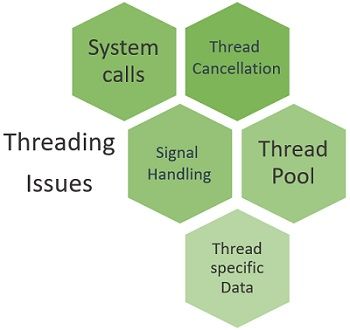 Which version of fork() must be used totally depends upon the application.

In such case, the version of fork() that duplicates only the thread that invoked the fork() would be appropriate.

Termination of the thread in the middle of its execution it is termed as ‘thread cancellation’. Let us understand this with the help of an example. Consider that there is a multithreaded program which has let its multiple threads to search through a database for some information. However, if one of the thread returns with the desired result the remaining threads will be cancelled.

Now a thread which we want to cancel is termed as target thread. Thread cancellation can be performed in two ways:

Asynchronous Cancellation: In asynchronous cancellation, a thread is employed to terminate the target thread instantly.

Deferred Cancellation: In deferred cancellation, the target thread is scheduled to check itself at regular interval whether it can terminate itself or not.

The issue related to the target threads are listed below:

Here the asynchronous cancellation of the thread where a thread immediately cancels the target thread without checking whether it is holding any resources or not creates troublesome.

Signal handling is more convenient in the single-threaded program as the signal would be directly forwarded to the process. But when it comes to multithreaded program, the issue arrives to which thread of the program the signal should be delivered.

Let’s say the signal would be delivered to:

The issue of an asynchronous signal is resolved up to some extent in most of the multithreaded UNIX system. Here the thread is allowed to specify which signal it can accept and which it cannot. However, the Window operating system does not support the concept of the signal instead it uses asynchronous procedure call (ACP) which is similar to the asynchronous signal of the UNIX system.

UNIX allow the thread to specify which signal it can accept and which it will not whereas the ACP is forwarded to the specific thread.

When a user requests for a webpage to the server, the server creates a separate thread to service the request. Although the server also has some potential issues. Consider if we do not have a bound on the number of actives thread in a system and would create a new thread for every new request then it would finally result in exhaustion of system resources.

Whenever the request arrives at the server, it invokes a thread from the pool and assigns it the request to be serviced. The thread completes its service and return back to the pool and wait for the next request.

If the server receives a request and it does not find any thread in the thread pool it waits for some or the other thread to become free and return to the pool. This much better than creating a new thread each time a request arrives and convenient for the system that cannot handle a large number of concurrent threads.

We all are aware of the fact that the threads belonging to the same process share the data of that process. Here the issue is what if each particular thread of the process needs its own copy of data. So the specific data associated with the specific thread is referred to as thread-specific data.

So these are threading issues that occur in the multithreaded programming environment. We have also seen how these issues can be resolved.