Let us take a simple example:

Note: If we have to replace the letter ‘z’ then the next three alphabets counted after ‘z’ will be ‘a’ ‘b’ ‘c’. So, while counting further three alphabets if ‘z’ occurs it circularly follows ‘a’.

There are also some drawbacks of this simple substitution technique. If the hacker knows that the Caesar cipher is used then to perform brute force cryptanalysis, he has only to try 25 possible keys to decrypt the plain text.
The hacker is also aware of the encryption and decryption algorithm.

Monoalphabetic cipher is a substitution cipher, where the cipher alphabet for each plain text alphabet is fixed, for the entire encryption.

Playfair cipher is a substitution cipher which involves a 5X5 matrix. Let us discuss the technique of this Playfair cipher with the help of an example:

Now, we have to convert this plain text to ciphertext using the given key. We will discuss the further process in steps.

Step 1: Create a 5X5 matrix and place the key in that matrix row-wise from left to right. Then put the remaining alphabet in the blank space. 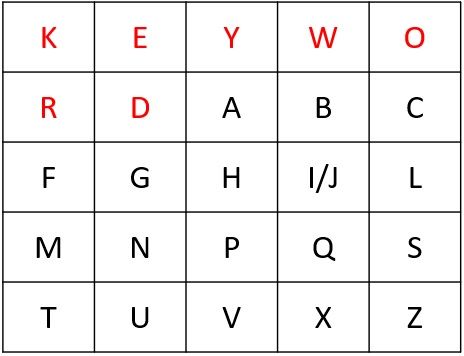 Note: If a key has duplicate alphabets, then fill those alphabets only once in the matrix, and I & J should be kept together in the matrix even though they occur in the given key.

Step 2: Now, you have to break the plain text into a pair of alphabets.

So, this is how we can convert a plain text to ciphertext using Playfair cipher. When compared with monoalphabetic cipher Playfair cipher is much more advanced. But still, it is easy to break.

Hill cipher is a polyalphabetic cipher introduced by Lester Hill in 1929. Let us discuss the technique of hill cipher.

Choose the key in such a way that it always forms a square matrix. With HILL as the key, we can form a 2×2 matrix.

The general equation to find cipher text using hill cipher is as follow:

For our example, our key matrix would be:

And our plain text matrices of 2×1 will be as follow:

Now, we have to convert the key matrix and plain text matrices into numeric matrices. For that number the alphabets such as A=0, B=1, C=2, …………, Z=25. So, considering the alphabet numbering:

Key matrix will be:

Plain text matrices would be:

In the first calculation, we would get two cipher alphabets for plain text alphabet ‘B’ & ‘I’. 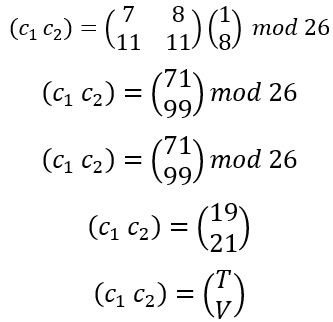 So, the cipher alphabet for plain text alphabet ‘B’ & ‘I’ is ‘T’ & ‘V’. Similarly, we have to calculate ciphertext for remaining plain text. And then accumulate them to form the ciphertext.

The calculated ciphertext for ‘Binary’ using hill cipher is ‘TVNNZJ’.

Onetime pad suggests a new key for each new message and of the same length as a new message. Now, let us see the one-time pad technique to convert plain text into ciphertext. Assume our plain text and key be:

Now, you have to add the number of the plain text alphabet, to the number of its corresponding key alphabet. That means, for this example, we will add:

In this way, we can convert plain text to cipher text using a one-time pad.