Data Encryption Standard (DES) is the symmetric block cipher which encrypts a 64-bit plain text in a 64-bit ciphertext. The DES was introduced by the National Institute of Standard and Technology (NIST) in the 1970s. Initially, DES was only used in financial applications but later it was accepted as the cryptographic algorithm by other organizations too.

Being a symmetric cipher the same key is used in encryption and decryption process of DES. In this context, we will discuss the steps performed in DES and we will also discuss the advantages and disadvantages of DES.

Data Encryption Standard is a symmetric block cipher which takes the input of 64-bit plain text along with 64-bit key and process it, to generate the 64-bit ciphertext. The diagram below illustrates the working of DES. We will discuss its step in brief. 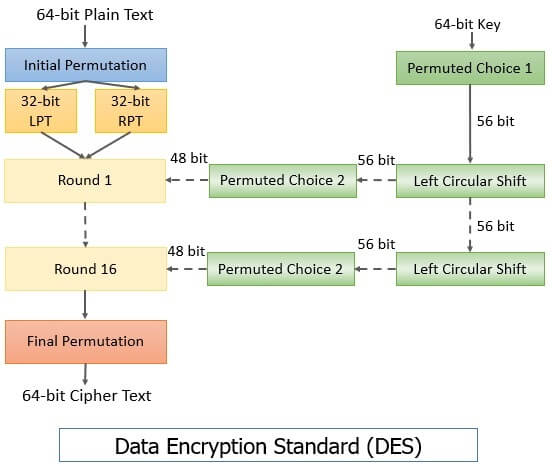 Step 2: Now, 16 rounds of DES encryption will be performed on this LPT and RPT with a 56-bit key.

Step 3: After the 16th round the 32-bit LPT and 32-bit RPT are integrated which forms a 64-bit block again and then the final permutation is applied to this 64-bit block, to obtain the 64-bit ciphertext.

The same Data Encryption Standard algorithm used for encrypting the plain text is also used to decrypting the ciphertext. But the algorithm is reversed, such as the initial and final permutation events are reversed. Even the sequence of the subkeys applied in 16 rounds of DES are also reversed.

Earlier we have discussed that the initial key size is 64-bit which is reduced to the 56-bit key. This is done by discarding every 8th bit from the 64-bit key. So, for each round of DES, this 56-bit key is used. In the key transformation step, this 56-bit is transformed to the 48-bit key. Let’s see how?

The 56-bit key is split into two halves. Each half is of 28-bit. Now, a left circular shift is implemented on both the halves which shift the bits in two halves by one or two positions depending on the order of the round.

Thus, the key transformation step provides a different 48-bit subkey for each round of DES.

In the first step of encryption, during the initial permutation of DES, the 64-bit plain text is permuted and we have 32-bit LPT and 32-bit RPT. Now, the expansion permutation is performed on the 32-bit RPT which transforms it from 32-bit to 48-bit. The 32-bit LPT is untouched during the process.

For expansion, the 32-bit RPT is divided 8 blocks, where each block is of 4-bit. Each block of 4-bit is expanded to block of 6-bit as you can see in the image below. The extreme two bits of the block are repeated and the middle two-bits is passed on as it is.

After expansion, now the 48-bit RPT is XORed with the 48-bit key and the resultant 48-bit block is transferred to S-box substitution. 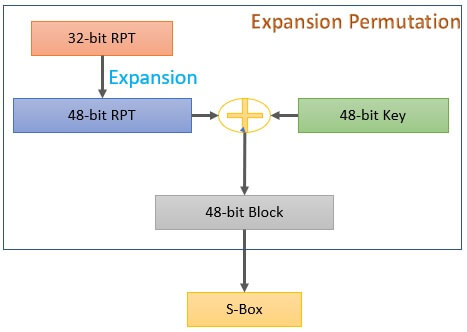 The input to S-box is 48-bit resultant block of expansion permutation. In S-box substitution, the input 48-bit block is transformed to 32-bit block but the question is how?

The 48-bit input block to S-box substitution is divided into 8 blocks of 6-bit each and is provided as input to 8 substitution boxes also called S-boxes. Each s-box has an input of 6-bit and its outputs 4-bit.

Each S-box is considered as the table which has 4 rows 0-3 and 16 columns i.e. 0-15. Why 4 rows and 16 columns? Because from the 6-bit input to s-box the two extreme bits are used to determine the number of rows. 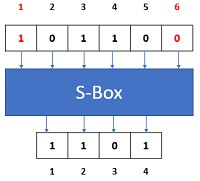 Now, we will see how the 6-bit input is transformed to the 4-bit output. For example, in the figure above you can see that input bit, at position 1 and 6 i.e. ‘10’ that represent 2 which determines 2nd row and middle 4 bits i.e. ‘0110’ that represent 6 which determines the 6th column of s-box. The value at the intersection of the 2nd row and 6th column will represent the 4-bit output of corresponding s-box.

The 32-bit output obtained from s-box substitution is provided as an input to P-box. Here, the 32-bit input is simply permuted and send to the next step. 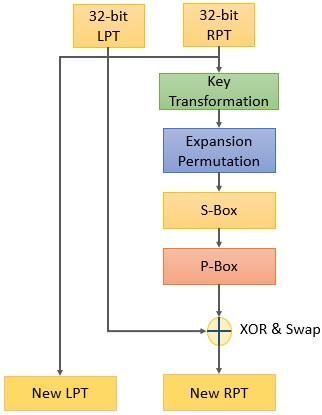 So, here the process of a single round ends and next round start which has the same function.

Advantages and Disadvantages of DES

So, this is all about the DES block cipher. In 2001 the NIST has published Advanced Encryption Standard (AES) to replace DES. Because DES was meant for the hardware and its relatively slow performance on software leads to its replacement.