Specification of tokens depends on the pattern of the lexeme. Here we will be using regular expressions to specify the different types of patterns that can actually form tokens.

Although the regular expressions are inefficient in specifying all the patterns forming tokens. Yet it reveals almost all types of pattern that forms a token.

The set of digits (symbols) {0, 1} forms a binary alphabet. As there are only two symbols to form an alphabet.

The Unicode system defines an alphabet by assigning a unique number to each alphabet. On average, it has 100000 alphabets from around the world including emojis.

Note: The empty string or the string with length 0 is represented by ‘∈’.

Proper Prefix of the string abcd: a, ab, abc

The proper suffix of the string includes all the suffixes excluding ∈ and the string s itself.

The substring of a string s is obtained by deleting any prefix or suffix from the string.

The proper substring of a string s includes all the substrings of s excluding ∈ and the string s itself.

The subsequence of the string is obtained by eliminating zero or more (not necessarily consecutive) symbols from the string.

A subsequence of the string abcd: abd, bcd, bd, …

If s and t are two strings, then st denotes concatenation.

As we have learnt language is a set of strings that are constructed over some fixed alphabets. Now the operation that can be performed on languages are:

Concatenation links the string from one language to the string of another language in a series in all possible ways. The concatenation of two different languages is denoted by:

The positive closure on a language L provides a set of strings. This set of strings is obtained by concatenating ‘L’ one or more times. It is denoted by:

It is similar to the Kleene closure. Except for the term L0, i.e. L+ excludes ∈ until it is in L itself.

So, these are the four operations that can be performed on the languages in the lexical analysis phase. 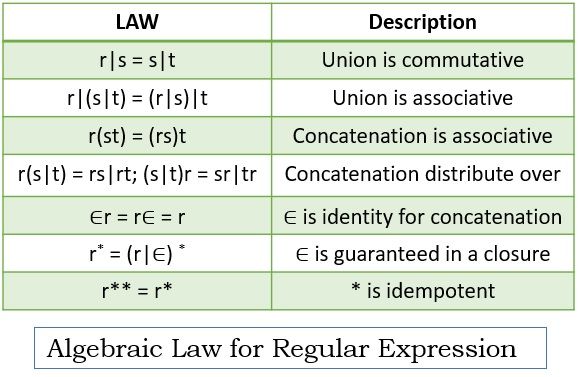 If Σ = alphabet of the basic symbol

Then regular definition is a sequence of definitions of the form.

Each definition i.e. each di is a new symbol and is not present in Σ. Each of the d’s is unique.

1. One or more instances

The unary postfix operator + denotes the positive closure which means one or more occurrences of the expression.

The precedence and associativity of the operator + are the same as the operator *.  The algebraic law representing the relation between Kleene closure (*) and the positive closure (+) is:

2. Zero or one Instance

The unary postfix operator ‘?’ denotes zero or one occurrence of the regular expression r.