What is Scheduling in Operating System?

Scheduling is the process of allotting the CPU to the processes present in the ready queue. We also refer to this procedure as process scheduling.

The operating system schedules the process so that the CPU always has one process to execute. This reduces the CPU’s idle time and increases its utilization.

The part of OS that allots the computer resources to the processes is termed as a scheduler. It uses scheduling algorithms to decide which process it must allot to the CPU.

Why Scheduling in Operating System is Important?

In your day to day life, you schedule your work sequences to get:

Like in the morning you wake up, have breakfast, work for some hours take lunch, again resume your work, at night have dinner and go to bed. Doing this way, you make your day more logical and efficient.

Similarly, the operating system schedules the processes to achieve maximum CPU utilization. The processor can keep several processes in the main memory in the multiprogramming environment. And some or the other processes must be running at all times.

As we know a typical process has both I/O times as well as CPU time. When a process completes its CPU time and now needs to perform I/O operation. The operating system takes the CPU from this process. And provides it to the other process waiting for the CPU. In this way, the operating system manages the CPU resources in an efficient way.

The operating system schedules every computer resource before providing it to the process.

The operating system maintains some queues. These queues sort out the scenario that which the process is waiting for what kind of operation. The queues maintained by the system are as follows:
Well, both the device queue and ready queue maintain the PCB for the processes they are carrying. I have briefly explained the process control block (PCB) in my earlier content. PCB of a process stores the relative information of the process such as: 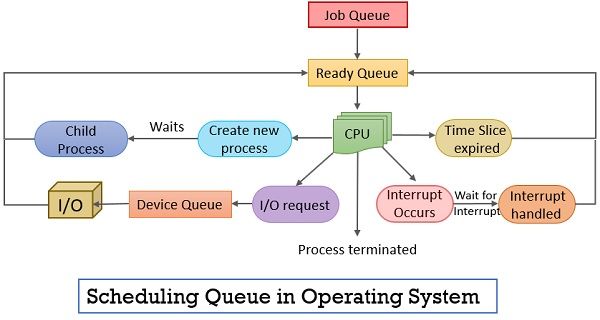 Above we have discussed three scheduling queues. A process migrates among these queues before it terminates. The scheduler picks an appropriate process from these queues to maximize CPU utilization.

This schedular can be further distinguished as:

The long-term schedular picks the process from the mass storage device such as a hard disk. And places it in the ready queue that is in the main memory.

Why do we term it Long-Term Scheduling?

Because this scheduler selects a new process from the mass storage less frequently. The creation of new processes one after the other is at least separated by the minutes of duration.

In this condition, the long-term scheduler has to select a process from the mass storage. Only when a process leaves or departs the system.

The short-term schedular picks one process from the ready queue. And allots the CPU to this process.

Why do we term it Short-Term Scheduler?

Because this scheduler frequently selects the process from the ready queue. And allots it to the CPU. As the processes include both I/O time and CPU time. They keep on switching between the CPU and I/O devices.

The medium-term scheduler removes the partially executed process from the ready queue. This reduces the degree of multiprogramming. This process can be later reintroduced in the ready queue. And they can resume the execution from where it left off. This procedure is also referred to as swapping.

There are a few more algorithms for scheduling the process. We will discuss them in some of our later content.

So, scheduling is the important part of the operating system that controls the degree of multiprogramming. Thus perfect scheduling increases the CPU utilization making the system more efficient.