FCFS is a Batch System algorithm in which the user doesn’t expect a quick reply from the system. The Batch system accepts the algorithms that serve the process for a long-time period.

Further, we will discuss how the FCFS algorithm schedules the processes in the CPU.

In the table below you can see we have 4 processes p1, p2, p3, p4 along with their arrival time and their burst time.

The burst time is the time required by the process to complete its execution. There are two types of burst time, CPU burst and I/O burst.

Gantt chart is the graphical representation of the process scheduling. Now let us serve the processes in the First-Come-First-Serve order using the Gantt Chart.

Observe the Gantt Chart and table above, the process P1 arrives at 0 milliseconds i.e. earlier than any other process in the ready queue. So P1 doesn’t have to wait (waiting time=0) and is allotted the CPU first. Now P1 requires 5 milliseconds to execute meanwhile process P2 has arrived in the ready queue, but P2 has to wait till P1 is completely executed because of the non-preemptive nature of this scheduling algorithm (waiting time of P2 = 2 milliseconds).

The formula for calculating the following: 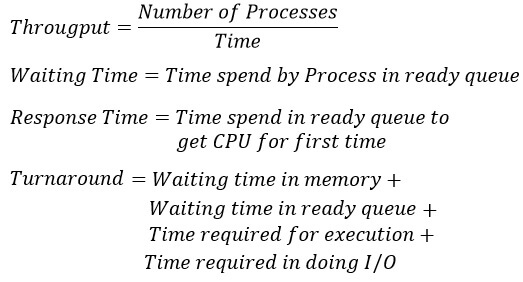 After some time, the CPU-bound process finishes its CPU burst time and moves on to I/O devices. So the I/O-bound processes hold the CPU and quickly finishes their execution as they have short CPU burst and move to the I/O devices, now, the CPU sits idle. This is a convoy effect where the short processes have to wait for one big process to finish its CPU burst. This also lower downs the CPU and I/O device utilization.

It is simple to understand and easy to implement the algorithm. Though it generates a high average waiting time it is good for processes with long burst time.