What is Positional Number System?

In a positional number system, the numbers are organized in the ordered set of digits where the value of each digit is decided by its position in the number and the base of the number system we are using.

In a positional number system, the value of each digit present in the number can be determined using the following three factors.

The general form of any number in a positional number system is:

The dot present between the digit a0 and a–1 is the radix point and value of the number can determine by:

In the section, ahead we will discuss the four most common number systems under the positional number system.

As here, in decimal number system we have the radix 10 each digit present in the is multiplied by 10, and the power of 10 is decided by the position of the corresponding digit in the number.

For example, we count the position of the digits in the number 8246 then the digit 6 is at one’s place, 4 is at ten’s place, 2 is at hundred’s place and 8 is at thousand’s place.

In general terms the representation of decimal number is:

Now let us see how can we represent a binary number to a decimal. Consider the binary number 1011012. Here the subscript 2 is used to avoid confusion between the various number system.

The binary representation of a number is:

So, for that, we use a hexadecimal form. You can understand this with the help of the table below: 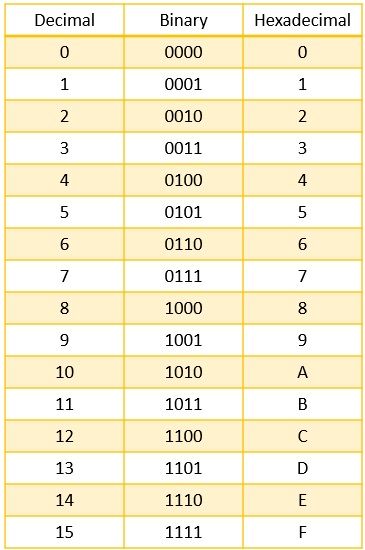 Now you can understand how the hexadecimal number represents a compact form.

To understand the ease of this system let us see how a long string of binary bits 1010100111112 is easy converted to the hexadecimal form:

Note: To convert a binary number into a hexadecimal form the first group all binary bits into sets of four bits which is also referred to as a nibble.

Now as we have divided the string of binary bits into three sets each having four bits. Find the corresponding symbol for each set from the table above which would be:

Consider a octal number 4678 and we will convert this to decimal.

So, these are the positional number system that is used while working with the computer. Among all of these, the hexadecimal number presents compact numbers and provides easier conversions.