Optical memory is an electronic storage medium that uses a laser beam to store and retrieve the data. If we classify the memory system then optical memory comes under the external memory in the computer system. Optical memory can be classified into many types.

What is Optical Memory?

Optical storage was introduced by Philips and Sony in mid of the 1980s. The optical memory is a round disk with a shiny surface on which data is imprinted by means of a laser beam. Thus optical technology was first used to represent analog sound signals into digital form.

The first practical application of this optical technology is a compact disk i.e.CD. The compact disk is the nonerasable disk and data is imprinted on the disk using a laser beam. Initially, the CDs were designed to hold audio information from 60-75 minutes that can store about 3 GB of data. Since then the development of low cost & higher-capacity devices started.

Finally, a label is stamped on to the acrylic surface. The total thickness of the CD is 1.2 mm to which the polycarbonate plastic contributes the most.

How the digital data is imprinted on the compact disk?

How the data is retrieved from the compact disk?

This reflected beam is now received by the photodetector which is also positioned below the polycarbonate plastic. 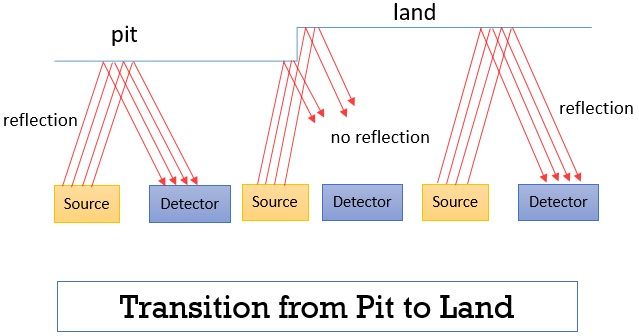 The figure below shows you several transitions of the laser beam between lands and pits.

The audio and video appliance can tolerate some amount of error as it does not reflect in the produced audio and video in a noticeable way. But when it comes to computer data the computer appliances do not tolerate any error. Now it is not possible to prevent physical imperfection while indenting pits on the CDs. So some extra bits must be added to detect and correct the error.

The CDs and CD-ROM has a single spiral track that starts from the centre of the track and spiral out toward the outer edge. The data is stored in CD-ROM in blocks i.e. sector. The number of sectors varies from track to track. There are fewer sectors in the inner tracks of the CD and more sectors in the outer track of the CD.

CD-Recordable i.e. (CD-R) was the first kind of compact disk that could be easily recorded by any computer user. This disk has a similar shiny spiral track as we can see in CD and CD-ROM. This shiny track is cover with organic dye at the time of manufacturing.

To record the data on the CD-R the disk is inserted into the CD-R drive and a laser beam is focused on the drive which burns pits onto the dye. The burned spot become opaque and the unburnt area still appears shiny. When the laser beam with low power is focused on the disk to retrieve the information. The opaque spots reflect light with less intensity and the shiny parts reflect light with high intensity.

This CD can be recorded multiple times which means the user can write and erase data from the CD-RW multiple times. This is because instead of using the organic dye an alloy is used which includes silver, indium, antimony, and tellurium. The melting point of this alloy is 500o C.

In case the alloy is heated at 200o C and maintained at that temperature for a certain period a process annealing takes place which turns the alloy into the crystalline state. At this state the alloy allows the light to pass through it.

So here the pits can be created by heating the selected spots above the melting point and the remaining parts between the pits are lands. The stored data can further be deleted using the annealing process.

The DVD technology was first introduced in the year 1996 and has the same appearance as that of the CD. The difference is in their storage size, the DVD has much larger storage than that of CD and this is done by implementing several changes in the design of the DVD.

Pits are much smaller as compared to pits of CD and even tracks are placed much closer as compared to the tracks in CD. With all these changes in design, the DVD has a storage size of 4.7 GB.

To increase the storage capacity even more the two-layered and two-sided disk was introduced.

The two-layered disk has the first base as present in CD but instead of using aluminium, the lands and pits of the first base are covers using a translucent material that solves the purpose of the reflector.

Now, this translucent layer is also programmed to store the data by indenting pits onto it. Reflective material is placed on this second layer of pits and lands.

Similarly, when the laser will be focus to read the second layer the first layer will reflect with a small amount of light that would be cancelled by the detector.

In this case, tracks are implemented on both sides of DVDs. This structure can be understood as the two single-sided disks that are put together to form a sandwich but the topmost disk is turned upside down.

So these all are types of optical memory that can be used to store digital data. The optical storage is durable, easy to transport and are capable of storing a vast amount of data.