What is Internal Memory?

The internal memories of the computer are made up of semiconductor material usually silicon. This memory is costlier and is usually small in size as compared to the external memory. 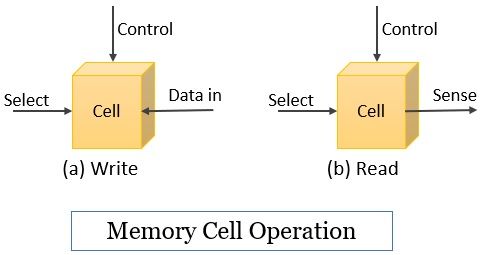 For writing the cell an electrical signal is passed through the read/write line which sets the cell’s status to 0 or 1. While reading the same read/write line is used to output the cells state.

The internal memory of a computer can be classified as RAM, ROM, and cache memory. 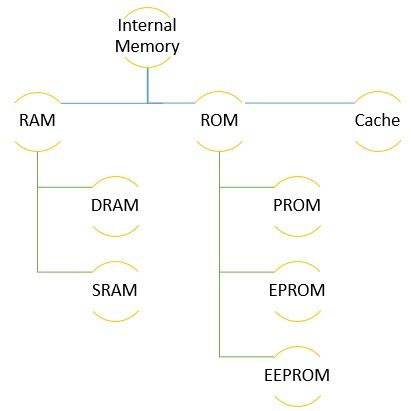 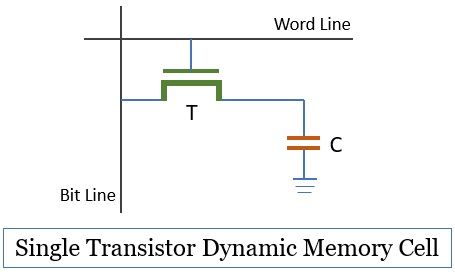 The capacitor automatically discharged after a period so to retain the data in the capacitor it must charge periodically.

In static RAM (SRAM) the memory cell is implemented using the two inverters that are cross-connected to form a latch and this latch in turn is connected to two-bit lines which are connected to two transistors. Here the transistors act as a switch that can be closed and opened under the control of the word line. 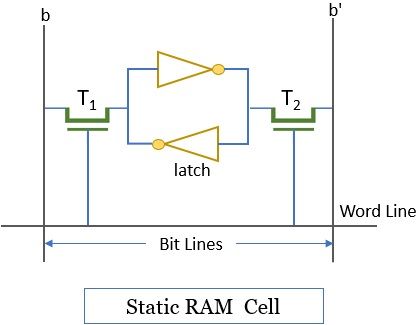 The transistors of a memory cell are switched on to perform the read and write operation on that particular memory cell. Well, both forms of RAM are volatile and require a continuous supply of power to retain their bit value.

The figure below shows the structure of a ROM memory cell where the bit value of the memory cell is 0 if the transistor is at a ground level otherwise it is 1. 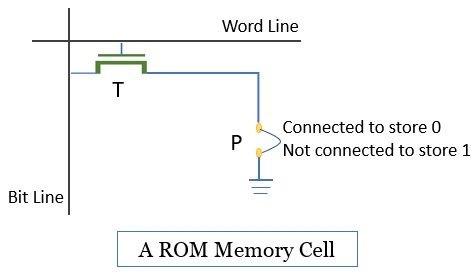 The ROM memory can be used for microprogramming, such as for storing library subroutines, system programs, function tables. The advantage of this internal memory is that the required data or the program is always present in the internal main memory and it is not required to get the data loaded from any secondary memory like in RAM.

On the ROM memory chip, the data or program is embedded during the chip fabrication so it leads to a large fixed cost whether you are fabricating a single copy or more. And even there is no scope for an error of even a single bit as it will ruin the entire batch of ROMS.

The programable ROM (PROM) is used when few ROMs are required with a specific memory content. PROMs can be written only once using electric signals.

The erasable programable ROM (EPROM) can be read and written using electrical signals. Well before a write operation is performed the memory content of this memory chip are erased to reatin its initial state by exposing the memory chip to the ultraviolet rays.

The EPROM can be erased and update repeatedly and like ROM and PROM, it retains its memory content even if there is no power supply. Compared to ROM and PRM the EPROM is more expensive.

The electrically erasable programable ROM (EEPROM) is the ROM memory that can be erased selectively and written multiple times. Unlike the EPROM where the entire data gets erased when exposed to the ultraviolet rays.

The cache memory is a volatile memory that loses its memory content once the power supply to the memory unit is interrupted. The cache memory keeps the copies of the recently accessed information from the main memory.